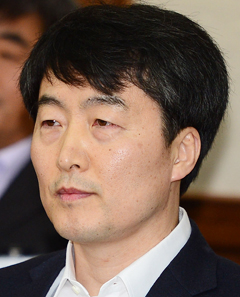 The prosecution called for Representative Lee Seok-ki, from the minor opposition Unified Progressive Party, to be jailed for 20 years and suspended from parliament for 10 for plotting a rebellion against the South Korean government for the North Korean regime.

In an appeals suit held yesterday in Seoul, prosecutors argued that Lee violated the National Security Law by attempting to overthrow the South Korean government with members of his underground ring, known as the Revolutionary Organization (RO).

“Representative Lee led and plotted the rebellion as the leader of the RO, despite the fact that he was an incumbent lawmaker at the time,” a prosecutor said at the trial.

“Given the fact that he also possessed more than 300 anti-state materials, and expressed his agreement with other groups that collaborated with the enemy [North Korea], we should give him a heavier punishment than an ordinary man, as he is a lawmaker.”

Prosecutors argued that Lee and his six co-defendants formed a plan to destroy key infrastructure, such as an oil storage facility and telecommunications utilities in the country.

“Their acts in planning to disturb the country on the home front was a plot that could cause massive casualties, such as destroying major infrastructure, and the aftermath of the act could fully trigger confusion in society,” the prosecutor said.

They called for 15-year prison terms for five of the defendants. The judges will give a ruling on Aug. 11, according to the Seoul High Court.

Ahead of yesterday’s trial, the leaders of the nation’s four major religious groups signed a joint petition calling for “clemency” for Lee, a cause of controversy among their devotees.

The leaders who signed the document include Cardinal Andrew Yeom Soo-jung, from the Catholic Church; Venerable Jaseung, the head of the Jogye Order of Korean Buddhism; Kim Young-joo, a representative of the National Council of Churches in Korea (NCCK); and Namgoong Sung, director-general of the Administration of Won Buddhism.

According to the Catholic Archdiocese of Seoul, a group of families of the convicted defendants visited the house of Cardinal Yeom on July 3 and requested him to sign a joint petition in his name ahead of the appeals suit.

The petition, written by the families in advance, read: “While no one approaches lepers for fear of being infected by them, it is the duty of a religious leader to give them a hand.”

However, without answering the request, Yeom wrote a petition himself and submitted it to the court.

“As I am not an expert in law, I can’t surely tell you anything,” his petition states.

“But I want you, the judges, to make a fair and just ruling based on legal principles and give then the opportunity to become members of our society and realize the values of reconciliation, unity, peace and love.”

The three other religious leaders - Jaseung, Kim and Namgoong - signed the joint petition arranged by the families without meeting with them in person, the groups said. The families submitted it to the court.

“It is not a matter of asking the court to release them,” an official with the Jogye Order told the JoongAng Ilbo. “It was just a message from religious people on a humanitarian basis for the unity of the people in the country.”

An official from the prosecution, however, said that the petitions were “unusual.”

“The case of Lee Seok-ki is much more important than other cases,” the official said. “We believe the religious groups should have been more cautious [in making such a request].”