North has the world’s largest fleet of submarines

North has the world’s largest fleet of submarines 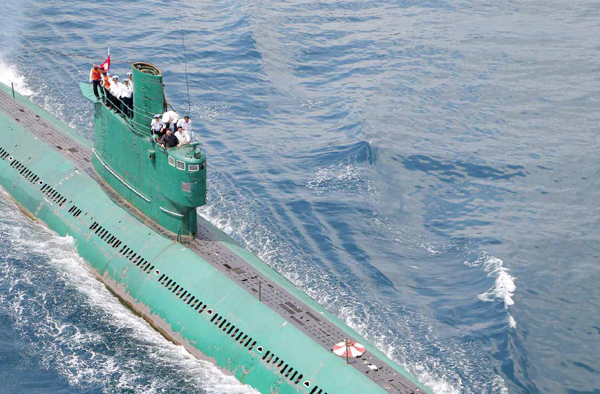 A photograph of a North Korean submarine, which the regime’s official Rodong Sinmun ran on June 16. [Rodong Sinmun]

North Korea possesses the greatest number of submarines in the world, although most of the fleet is “unsophisticated but durable,” according to a report earlier this month.

The article, entitled “35 Most Powerful Militaries in the World,” which was posted July 10 by Business Insider, a U.S. business and technology news website, has drawn tremendous media attention in South Korea, which just recently discovered that the nation was far behind the impoverished regime in terms of the quantity of its submarines.

According to the report, which cites statistics by the Global Firepower Index, which provides analytical data on military powers worldwide, North Korea owned 78 submarines as of April. That was more than the U.S. Navy, which has 72, and China, with 69. Russia followed with 63. South Korea ranked No. 10 in terms of the number of submarines it owns - only 14 - while Japan has 16.

However, the Business Insider report said the North Korean submarines are “almost entirely unusable,” according to its sources from the U.S. Department of Defense.

South Korea’s Defense Ministry confirmed the report, saying they assume the regime currently owns about 70 submarines, mostly for infiltration purposes. “As far as we know, North Korea is believed to continue to be operating its old submarines,” Kim Min-seok, the ministry’s spokesman, told reporters yesterday. “They also own a lot of small-size, infiltration-purposed submarines, less than 300 tons, which cannot travel long distances.”

Lee Yil-woo, a former South Korean army officer and an analyst for the Korea Defense Network, a civic research group on Korea’s national defense, said that although North Korea’s submarines are known to be old and seemingly useless, they are threatening to the South due to the peninsula’s geographic characteristics.

“It is very hard for the South Korean Navy’s sonar to detect a North Korean submarine, particularly in the deep East Sea,” Lee told the Korea JoongAng Daily. “In particular, if it is submerged more than 200 meters (656 feet) below the surface, the sonar can’t find it. About 60 of North Korea’s submarines are small, but they are capable of firing a torpedo.”