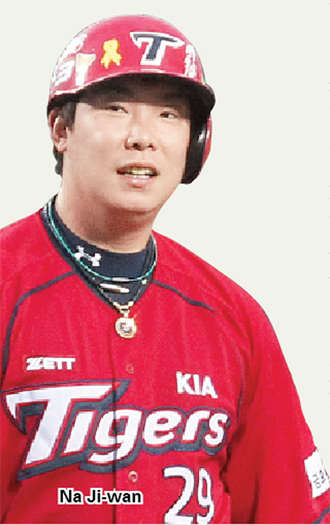 Monday - when national baseball team manager Ryu Joong-il announced his 24-man roster for the 2014 Incheon Asian Games - could have been a tough day for Kia Tigers slugger Na Ji-wan.

Na is 29 and by law must begin his mandatory two-year military service by the age of 30.

He has been playing hard this year to catch Ryu’s eye for a chance to represent his country and possibly get a military exemption, which is given to athletes who win a gold medal in the Asian Games.

Many Koreans jokingly refer to it as a “military-roid” that makes players perform better.

Whatever the reason, Na is enjoying a banner year hitting .336 with 16 home runs, good enough for one of the five outfield spots on Ryu’s national team.

The Ilgan Sports, an affiliate of the Korea JoongAng Daily, sat down with Na to talk about the national team and his stellar performance so far in 2014.

Q. You’re having a monster season this year, any secrets?

A. I actually was awful in the beginning, but started getting better. I think there have been ups and downs just like every baseball player has. Regardless of the numbers, what I can tell you is that I have tried my best my entire career. I think this is the toughest season so far. I really want this season to be over for many reasons. But as many people know, I have to join the military next year at the age of 30, when many baseball players are at their best, so I have been under serious pressure.

Was that why you struggled in April?

I think I cared about the military service thing too much. Since I really wanted to join the Asian Games squad, I was too aggressive at the plate and that caused me to go hitless in my first 19 at bats. I kind of gave up on the national team, reminded myself that the coach [Ryu] surely would not pick me. But from the moment I gave up, I got better.

Why didn’t you go to the military earlier, like many other players?

I started considering it four years ago, but the timing was never right. One year, my team asked me to play another season as they lost some players due to injuries, and another year I just wanted to have a good season before going into the military. This season has been a gamble for me. I don’t mean that I don’t want to go into the military. More stressful is my age, because I will be almost 33 after two years in the military. I advise young players to make the decision as early as they can. One of my goals this year was to play in the Asian Games, and I don’t care if I win a gold medal or not. I think I can gladly go to the military without any stress regardless of the outcome.

It looks like you have been stressed a lot more than people think.

After I hit a walk-off three-run home run in Game 7 of the Korean Series, I thought things would work out well in 2010 [the year of the Guangzhou Asian Games in China when Na wasn’t chosen for the national team]. I was pushing myself hard to go to the Asian Games, but nothing worked out. I didn’t, however, share my feelings with anyone and didn’t ask for advice from teammates or coaches.

After I struggled in 2010 and was sidelined for a long time in 2011, I realized that I would need to have a stronger fighting spirit to secure my position anywhere.

What is your goal for the rest of the season?

We have about 40 games to play and since the Asian Games will be staged during the KBO season, I will try to apply my experience and knowledge from the national team.

Another goal, of course, is to play every game in the Asian Games and contribute to the team.