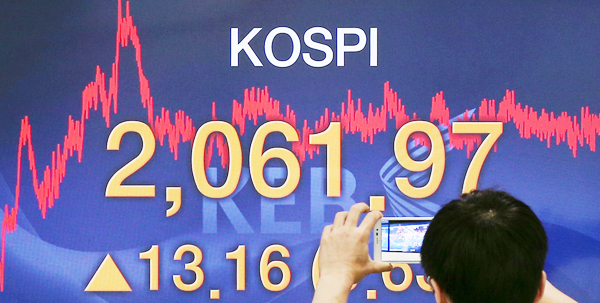 A Korea Exchange Bank employee takes a picture of the Kospi yesterday at the bank’s headquarters. The Kospi has reached its highest in three years. [NEWS1]

The central bank for the first time partially admitted that the nation’s ongoing account surplus was in part due to the sluggish domestic market.

This is a step back from its previous stance that the domestic market, although mild, was on a solid track to recovery.

Although the current account surplus was extended for 28 consecutive months, its second-longest streak since 1980 when data was first compiled, the Bank of Korea earlier denied that the surplus was what many referred to as a “recession type,” in which imports fell more sharply than exports grew on the back of a sluggish domestic market.

This is in line with the central bank’s recent revised outlook. The Bank of Korea lowered this year’s economic growth forecast from 4 percent to 3.8 percent, citing a severe decline in consumer spending, which was affected by the Sewol ferry tragedy in April.

“The current account surplus was able to expand partly because of the sluggish domestic market,” said Jung Young-taek, head of the Bank of Korea’s economic statistics department. However, the BOK officially stressed that it was “inappropriate” to refer to the surplus as a recession type.

“Brisk exports resulting from enhanced competition among manufacturers in non-price competitiveness has also made a contribution [to the surplus],” Jung said.

Jung added that import growth was lower than that for exports largely because the import price has fallen on the back of falling commodity prices. The BOK official noted that, by volume, imports rose 5.3 percent in the first quarter compared to a year earlier, while in the second quarter they grew 3.4 percent.

The current account balance has continued to post a surplus although it fell compared to the previous month, from $9.1 billion in May to $7.9 billion in June. Additionally, the current account surplus in the first half of the year reached a new record of $39.2 billion.

Automobile exports, on the contrary, further declined, from 1.1 percent in May to 7 percent in June.

On an annual comparison, exports definitely expanded. But compared to the previous month, exports fell. In May, exports amounted to $52.4 billion, but in June fell to $50.3 billion. Since April, exports have been falling for two consecutive months.

Shrinking exports come at a time when the global economy, particularly the advanced economy, has been improving. Exports to the United States continued to expand. Last month, they grew 15 percent from a year earlier to $6 billion. However, last month exports to Europe fell while exports to Korea’s largest export market, China, continues to struggle.

Imports, on the other hand, not only improved from a 1.6 percent year-on-year drop in May to post a modest growth of 0.2 percent in June, but they also inched up from $43.3 billion in May to $43.6 billion.

So although the goods account balance recorded a surplus at $6.6 billion, it continued to shrink after hitting this year’s peak of $10.7 billion in April.

Choi Seung-keun, senior analyst at the Hyundai Research Institute, warned last month that the government needed to prop up the domestic market to improve the surplus structure.

While economic indices remain concerning, optimism is spreading in the stock market. The Seoul main bourse, the Kospi, closed at its highest level in three years. The market closed at 2,061.97.

The last time the main stock market was above the 2,060 mark was when the market closed at 2,066.26 on Aug. 4, 2011. Although the hype has been moderate, the Kospi has been on an upswing for three consecutive trading days, largely thanks to Finance Minister Choi Kyung-hwan’s expansionary policies.

“It’s a matter of speed, but the stocks will continue to rise,” said Bae Sung-jin, an analyst at Hyundai Securities.