Chauffeur, a top aide to the late Yoo, surrenders

Chauffeur, a top aide to the late Yoo, surrenders 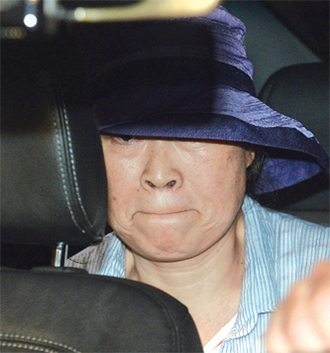 Kim Myung-sook, 59, leaves the prosecutors’ office on Monday after 14 hours of questioning. [NEWS1]

Yang Hoe-jeong, 55, the chauffeur to the late Yoo Byung-eun, has turned himself in to the prosecution, which raised expectations that he might be able to provide key clues about how the de facto owner of the Sewol ferry spent his final hours.

Yoo’s body was found in a plum orchard on June 12 in Suncheon, South Jeolla. Yang previously served as a facility manager at Geumsuwon, the headquarters of the Evangelical Baptist Church in Anseong, Gyeonggi. The church, more commonly known as the Salvation Sect, was a religious group the 73-year-old Yoo co-founded in the 1960s with his father-in-law.

Yang is known to have driven Yoo from the compound to other hideouts and finally to a villa in Suncheon.

“Yang testified that he considered handing himself over for the last three days since he heard the news that Yoo Byung-eun has died,” said Lee Heon-sang, a prosecutor at the Incheon office. “He finally decided to report himself to the prosecution after seeing that his wife was released yesterday after turning herself in.”

Lee added that Yang testified in the interrogation yesterday that he saw the elder Yoo for the last time on May 24 at the villa in Suncheon, two days before it was raided by prosecutors. Yang added during questioning that at the time he himself was staying at the religious sect’s training facility near the villa. He also said he prepared a secret room where they could hide in case of seizure. Yoo sought refuge in this hideaway when the residence was raided by prosecutors on May 25.

When Yang saw officials searching the facility where he was staying, he assumed that the villa was also being raided and fled to Jeonju, North Jeolla. There he abandoned his car and came back to Geumsuwon, Lee said.

He added that Yang did not know when or how Yoo died.

In a briefing yesterday, prosecutors disclosed what they were told by the two female accomplices who turned themselves in on Monday. Kim is suspected of having orchestrated Yoo’s escape, though the prosecution tentatively concluded that she is only a member of the Geumsuwon’s food preparation team, led by Shin Myeong-hee, 64, who is also known as Shin Eomma, or Mother Shin. Kim previously cooked for Yoo at Geumsuwon, and accompanied him while he was on the run, gathering necessities for him and preparing him meals.

The two women who turned themselves in on Monday were released after 14 hours of interrogation at the prosecutors’ office. Prosecutors previously announced that they would factor in whether Yoo’s accomplices handed themselves in within the month, adding that officials would consider an investigation without detention.

Meanwhile, the Gwangju District Prosecutors’ Office arrested the captain of a patrol boat from the Mokpo Coast Guard over allegations that he destroyed a daily log on the day of the Sewol ferry accident, which killed more than 300 people.

The boat was the first Coast Guard vessel that arrived at the scene that day. Crew members, however, reportedly only rescued those who had already emerged from the listing ferry and did not go inside the ship, even after they were ordered by their headquarters to do so. The 53-year-old lieutenant, only identified by his surname Kim, had been questioned since Monday. He was arrested around 3 a.m. yesterday after authorities learned he may have torn out or falsified official records.