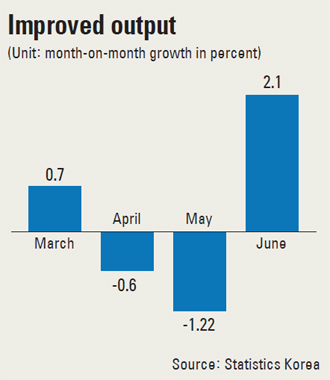 Overall industrial output in June saw its biggest improvement in more than three years, but not all indicators were positive as consumer spending and business investment shrank.

The report released by Statistics Korea yesterday comes at a time of mounting concern over the slowing economic recovery.

Finance Minister Choi Kyung-hwan has stressed that if it’s not dealt with swiftly and aggressively, the country could face a period of deflation and low growth similar to what Japan has experienced for the past two decades.

According to the report, industrial output, including both manufacturing and services, grew 2.1 percent in June compared to the previous month. Not only is that a turnaround from month-on-month declines since a 0.7 percent gain in March, it was the best rate of growth since output rose 4.1 percent in March 2011.

Compared to last year, output reversed from a 0.7 percent decline in May to increase 1.3 percent in June.

The most positive sign in the Statistics Korea report was output from the services sector, which had been depressed since the Sewol ferry tragedy in April that killed more than 300 people.

In April, service industry output fell 1.1 percent month-on-month, but in May it inched up 0.5 percent and further expanded to 1.6 percent last month.

Although growing demand for semiconductor chips used in mobile devices contributed to the increase, the report also said manufacturing numbers in June benefited from reduced production in May due to extensive holidays.

Starting with Labor Day on May 1, which was a Thursday, many workers were off until the following Wednesday with Children’s Day on Monday and Buddha’s Birthday on Tuesday. For the month, manufacturing output declined 2.8 percent.

Compared to June 2013, manufacturing output was up 0.6 percent.

The services industry - thanks to an increase in broadcasting, publications and other content, as well as the financial and insurance industry - saw output rise 1.6 percent compared to 0.5 percent in May. Year-on-year expansion was 2.2 percent, up from 0.6 percent in May.

However, consumer spending data was less hopeful. Although the retail sales index inched up 0.3 percent month-on-month, that was a sharp decline from 1.2 percent growth in May.

Business investment shrank in June at a high rate of 1.4 percent compared to a 0.8 percent decline in May.

“While we are closely monitoring economic movement, we will make sure that the economy makes a solid recovery,” said an official at the Finance Ministry. “We will swiftly and thoroughly push our efforts on revitalizing the economy, including the 41 trillion won [$40 billion] plus policy.”