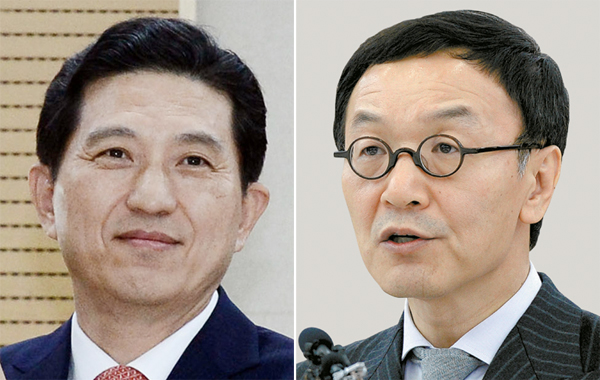 Last July, Lee Kun-ho, then Kookmin Bank’s vice president, visited Lim Young-rok, the newly appointed CEO of KB Financial Group. It was around the same time that Lee was being mentioned as a candidate for president of Koomin Bank. “Vice President Lee said he had no interest in becoming the CEO [of KB Financial Group],” Lim said. “At that time, I took the meeting as ‘I will be focusing on my role as the bank’s president so don’t try to interfere.’”

Lim said he fully supported Lee as president. Considering his own background as a finance ministry official, Lim thought it would be better to have Lee running the bank instead of someone who had been there for years and would take a more dominant role.

Also, Lee was close with Jeong Chan-woo, vice chairman of the Financial Services Commission (FSC), as they had worked together for years at the Korea Institute of Finance (KIF). So Lim and Lee came together despite their different backgrounds, one as a mofia (a portmanteau of the words for Ministry of Finance and Economy and mafia) and the other a yeonfia (a combination of the Korean word for the KIF and mafia).

But their precarious alliance started to fall apart in October, when KB Group proposed to change the bank’s operating system from IBM to UNIX. Management at KB Financial Group held several discussions before unanimously agreeing to switch to a UNIX operating system, which is cheaper. Twice, IBM was given chances to offer a new price but was unable to satisfy KB’s demands.

However, things changed in January, when Jung Byung-ki, an auditor at the Korea Federation of Banks (KFB), was appointed as the standing auditor of Kookmin Bank. During his time at the KFB, Jung had become acquainted with Jeong, then-researcher at the KIF, who according to rumors, approved Jung for the auditing job.

What seemed like a simple operating system transition took another turn after the CEO of IBM Korea sent an email complaining to Lee on April 14. Hoping for another chance at the deal, IBM lowered its bid to match UNIX’s price.

Around this time, Jung and Lee suggested that IBM be included in a rebid. The proposal was put to a vote during a board of trustees meeting on April 24. However, apart from Jung and Lee, the other eight directors in attendance agreed to stick with the UNIX operating system.

Four days later, Jung opened a special audit of Kookmin Bank’s strategic planning department and its IT division, which pushed the change to the UNIX system. After a weeklong inspection, Jung requested that the board of trustees reconsider the bid, saying he found “evidence that, initiated by the financial group, the IT division manipulated a report to UNIX’s favor.”

But the board claimed that the audit did not follow proper procedures and notified that it will investigate the matter on its own. Regardless, Jung reported his results to the Financial Supervisory Service (FSS). Lee and Jung argued that though the operating system affects 28 million customers, there was no other choice [besides UNIX] since the board declined to discuss the issue at its meeting.

The FSS promptly took the matter into its own hands, but its two-week investigation found no issues with the bidding process. An FSS official said “there was no evidence of direct orders coming from chief executives that were related to cozy relations with a [specific] IT corporation or the changing of the operating system.”

This became an awkward situation for the FSS, which warned Lim and Lee in June that they would be severely punished. Since then, the Sanctions Review Committee, a quasi-judicial entity within the FSS, has not said how the two will be punished and as of now, the reason is “causing damage to the bank’s reputation.” This raises a difficult question for the Sanctions Review Committee: Is it reasonable to punish the presidents of Kookmin Bank and KB Financial Group for such an offense?

Speculations as to why the operating system was changed dealt a major blow to KB. Lim and Lee each suspect that the other was trying to exert his authority.

“Many are jealous of my position and there were a lot of people who tried to shake things up,” Lim said.

“It’s hard to be 100 percent sure that the communication [between Lim and me] was great,” Lee added.

Some say there was no chance that Lee and the parachute-appointed Lim would get along well, and emphasize that the first step is to eliminate the high-handed appointment of officials. Others add that the intervention of the FSS and FSC, which tried to control KB Financial Group during a difficult time, only exacerbated the situation.