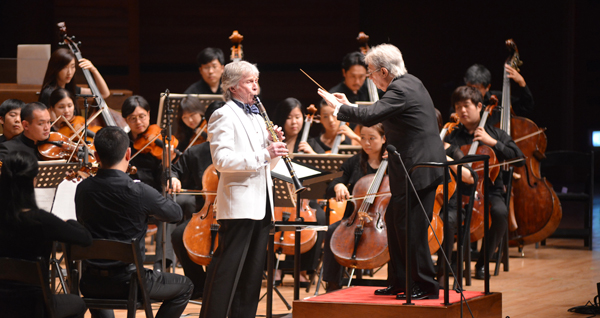 Richard Stoltzman plays “Introduction, Theme and Variations” from “La donna del lago,” on clarinet, accompanied by the GMMFS Orchestra under the baton of Antoni Ros-Marba. Provided by the GMMFS

PYEONGCHANG, Gangwon - When the first six-minute performance by Chung Myung-wha and Chung Kyung-wha ended on the opening night of this year’s Great Mountains Music Festival and School in Pyeongchang, Gangwon, none of the 625 audience members in the concert hall applauded.

The two sisters, cellist Myung-wha, 70, and violinist Kyung-wha, 66, are not only world-renowned musicians but are also artistic directors of the largest and most established classical festival in the country, which celebrates its 11th year. But they, too, didn’t seem to expect a response from the audience after playing the mournful piece of music.

In fact, the moment of silence after the first performance was deliberate as an expression of condolences for the victims of the Sewol ferry disaster that took place in waters off Jindo County 100 days ago from that evening. 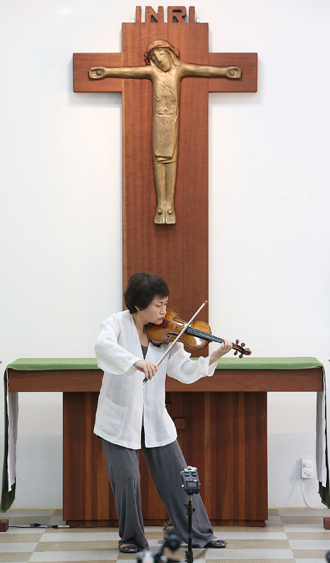 Violinist Chung Kyung-wha, an artistic director for the festival, performs on Sunday at the Daegwallyeong Chapel for residents who live near the area where the event takes place.

“I was starting to forget about the tragic Sewol ferry incident, but while listening to the music to mourn for the victims, I really prayed for them again,” said Park Ji-min, 43, from Seoul. She brought her 10-year-old violinist daughter to the festival.

“I hope my daughter realizes that you can also touch people’s hearts and communicate with people through music during our stay here.”

Despite a rather poised start, the 11th Great Mountains Music Festival and School (GMMFS), which kicked off in the Alpensia Resort and other nearby venues on July 24, quickly resumed its usual lighthearted and festive mood under this year’s theme, “O Sole Mio.”

The opening-night performance at the concert hall was followed by music from Italy and Spain.

Barcelona-based dancer and castanet player Belen Cabanes and Chinese guitarist Xuefei Yang heated up the stage with a performance of Boccherini’s Guitar Quintet.

As the GMMFS is known among music students across the globe not only for its performances by distinguished musicians but for the master classes taught there, artistic directors said they had to turn down some 100 talented students who applied for the school due to limited capacity.

Although most of the concerts were sold out, one of the most popular was a special show held inside Daegwallyeong Chapel on Sunday afternoon.

As part of the festival’s visiting concert, violinist Kyung-wha performed Bach’s sonatas and partitas for solo violin. Although the chapel can only seat 150 people, nearly 400 people turned up. The organizers quickly added 20 more seats inside the chapel.

There are 10 visiting concerts for residents altogether, but just one remains.