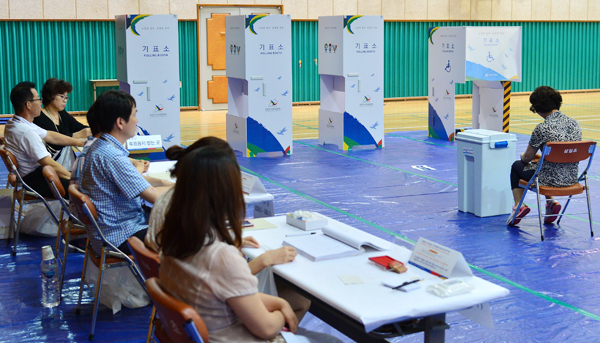 The polling station for the by-elections yesterday in Dongjak B District, southern Seoul, stands empty of voters yesterday. Turnouts yesterday remained lower than 40 percent, likely because the voting day was not an official holiday and in the middle of the summer vacation season. [NEWSIS]

Voters around the country cast their ballots yesterday in Korea’s largest-ever by-elections, in which 15 lawmakers were voted into office.

Voter turnout yesterday stood at 32.9 percent, which was significantly lower than last year’s April 24 by-elections, which saw a 41.3 percent turnout.

Voting lasted for 14 hours from 6 a.m. until 8 p.m. yesterday at 1,003 polling stations across 15 constituencies nationwide.

In the closely watched Dongjak B District race, the only election waged in Seoul, which pitted Saenuri candidate Na Kyung-won against Roh Hoe-chan of the minority Justice Party, 46.8 percent of eligible voters cast their ballots, the second-highest turnout in the 15 races yesterday.

Because of the political significance of winning a Seoul district, the stakes of a victory there loomed larger than in any other race nationwide.

For five races in Gyeonggi, which were seen as pivotal for their proximity to Seoul, voter turnout stood at 31.1 percent.

A race for Suncheon and Gokseong County in South Jeolla in which former presidential aide Lee Jung-hyun of the Saenuri Party faced off with Suh Gab-won of the NPAD drew widespread attention because of the mounting possibility that the Saenuri could clinch the opposition’s traditional stronghold. If Lee pulled off a victory in the opposition’s power base, it would mark the first time ever that a Saenuri candidate clinched a victory in South Jeolla.

The Suncheon race saw the highest voter turnout yesterday at 51 percent, a reflection on the high interest in its outcome. The result of the race was not available as of 8:30 p.m. last night.

Though NPAD candidate Kwon Eun-hee was certain to win in a Gwangju district race, she saw the lowest voter turnout yesterday, which came to 22.3 percent, more than 10 percent lower than the overall average yesterday.

Such a disappointing result was interpreted as a reflection of the negative sentiment, in the New Politics Alliance for Democracy’s traditional stronghold, toward the former police official, who was accused of trying to hide her husband’s real estate assets to pay less taxes.

It is generally thought that a higher voter turnout works in favor of the opposition, though it is too early to tell whether yesterday’s low turnout would benefit the ruling Saenuri.

Because of its scale, the by-elections yesterday had been referred to as a mini general election, raising the political implications in winning a majority of the 15 races. The ruling Saenuri pleaded for support, claiming that it needed to retain a majority in the 300-member Assembly to maintain momentum for the conservative Park government to realize a highly touted drive for reform and revive a sluggish economy.

The opposition, on the other hand, called on voters to hold the ruling administration accountable for its botched efforts in response to the sinking of the Sewol ferry, as well as a series of embarrassing failed cabinet appointments.

The outcomes of yesterday’s elections will have a tremendous impact on the trajectory of a number of political heavyweights, including the Saenuri’s newly elected leader Kim Moo-sung and NPAD Co-chairman Ahn Cheol-soo, and could shift the balance of power among the presidential office and the ruling and opposition parties.