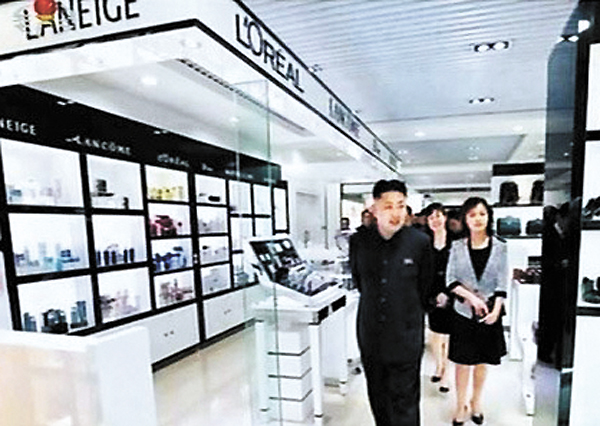 North Korean leader Kim Jong-un visits the Haedanghwa Health Complex in March. One of the shops has a sign of a South Korean cosmetics brand, Laneige. Sources said Kim had the sign removed. [KCTV]

The Korean wave, also known as Hallyu, appears to be sweeping the world’s most reclusive country, particularly in the form of the South Korean television drama, “My Love from the Star.”

Sources familiar with North Korea said many young people and residents in Pyongyang in tune with news from the outside world have already watched or are aware of the drama, even though it has been only a few months since the program ended its run in February.

North Korean viewers have allegedly said they are charmed by the two lead actors, Kim Soo-hyun and Jun Ji-hyun. The clothing and accessories featured in the show, and even Jun’s makeup style have all drawn the eyes of female audiences in the regime as well, they say.

“The biggest characteristic of the Korean Wave in North Korea is that the smuggling of South Korean materials into the country and their distribution has been much faster these days,” said Kang Dong-wan, a political science professor at Dong-A University.

Kang said he recently visited a region in China on the border with North Korea to investigate current affairs concerning the Korean Wave in the Communist state, showing a JoongAng Ilbo reporter an MP5 player.

The mobile player, he said, which costs about 20,000 won ($19.49) in South Korea, is currently being sold in the North and boosting the spread of South Korean dramas and film.

Sources claim more North Koreans are not only interested in dramas or movies from the capitalist South, but also enjoy some TV talk show programs, such as “Morning Yard,” geared toward housewives, and “Livetong,” a lifestyle program.

When it comes to medicinal products, some residents in Pyongyang have been known to ask pharmacists for Fucidin, a popular South Korean ointment, sources said.

Still, despite the rapid spread of such contraband, authorities have cracked down. State media denounced the popularity “bourgeois, delinquent styles” and the “yellow dust of capitalism.”

Kim Jong-un is also reportedly urging authorities to stop South Korean culture from permeating into the country, going so far as to launch a special task force to monitor it.

However, sources said the crackdown is not easy to enforce.

Previously, it was easy for authorities to apprehend citizens who watched South Korean dramas or movies, as these products mostly circulated in CD or video tape format. Otherwise, they the raided homes of those suspected to be secretly gathering to watch these programs and seized the tapes as evidence.

Now, however, content is more commonly shared on USB sticks or the MP3 players, which are easy to hide. Some even use micro SD cards, sources familiar with the situation said.

Big players in the underground market for South Korean dramas and movies also generally know how to avoid being caught. According to the South Korean government and North Korea analysts, these vendors sometimes bribe authorities and allegedly collaborate with other street vendors to run their own separate black markets.

The only drawback, analysts say, is that while the Korean wave has played a role in showing the North Korean people what life is like in the South, for many defectors, the story is much different, and they find that settling down here is a much colder ordeal.