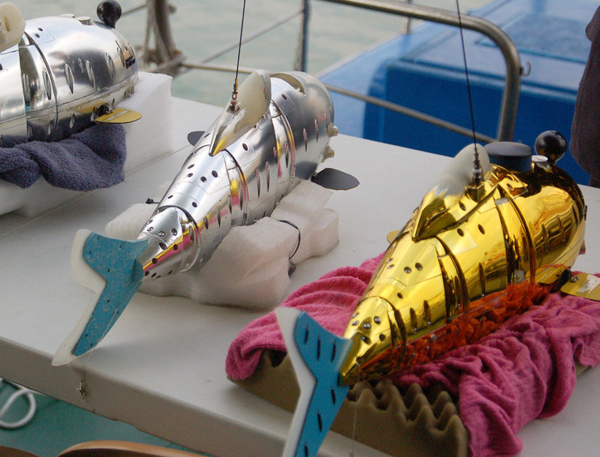 The robot fish were developed to monitor water quality. Provided by BAI

The robot fish developed with an immense state budget of nearly $6 million to monitor water quality in the country’s major rivers have been found to be malfunctioning and not as technologically advanced as previously stated, Korea’s Board of Audit and Inspection announced yesterday based on the results of its probe.

The technology is part of an ambitious project known as the Four Major Rivers Restoration Project led by the previous Lee Myung-bak administration. The board’s inspection showed that seven out of nine robot fish were non-operational and that the remaining two were unable to swim properly.

They are supposed to swim at 2.5 meters per second (5.5 miles per hour) in the river, but swam at only 23 centimeters (0.5 miles per hour). The National Assembly requested in November that the inspection agency conduct an investigation.

The results reverse the findings of a report by the Korea Institute of Industrial Technology (KITECH), the leader of the project, in August that said the nine robots met all seven criteria that gauge the success of their development.

Based on this bloated achievement record, confirmed yesterday to have been formulated through skipped or manipulated data, the Korea Research Council for Industrial Science and Technology, which assists government-funded research institutes, concluded that the robot fish project was “successful.”

The robots were supposed to be equipped with technologies to monitor water quality, autonomous swimming control mechanisms and wireless power recharging technologies. However, the state auditor found that a sensor that measures the water’s cloudiness had not been installed on the fish as it was supposed to. The other four sensors that the fish were equipped with measured temperature, acidity, electrical conduction and dissolved oxygen quantity in rivers. Making matters worse, the only sensor that proved to be operational was the one measuring electrical conduction. The other three sensors stalled during testing. The controversial restoration project is one of the priciest legacies left behind by the Lee administration, despite persistent public uproar about the environmental impacts. Declared complete in October 2011, the project was to contribute to revitalizing Korea’s four major rivers, securing abundant water resources and implementing comprehensive flood-control measures, the former administration said.

The inspection body also discovered that although KITECH and other research labs involved in the robot fish project announced that they had patented a combined 88 cases linked to their development between 2011 and 2013, just 64 cases - or 73 percent - were either unrelated to the robots or tied to other research institutions.

The council misappropriated a 89 million won research fee by doctoring a document related to the design of the mold for the fish, even though it was not included in the research.

“Because the Korea Research Council for Industrial Science and Technology did not adequately review the research project, it has become difficult to trust the assessment it came up with,” the Board of Audit and Inspection said in a statement, adding that it has requested a reassessment.

The agency also demanded that the council punish two of its researchers involved in the corruption.