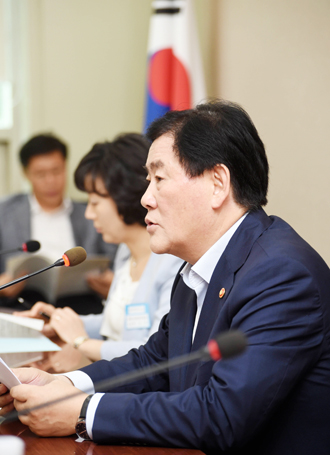 The government plans to spend more than 5 trillion won ($4.9 billion) from public-sector reserves, bolstered by the strengthening won, to help revitalize the private sector as part of its economic stimulus program.

The money will be used to expand loan guarantees by public companies from 41 trillion won to 46 trillion won.

“We will use the 5 trillion won- plus that has been generated by the public sector cutting back on debts under last year’s normalization process thanks to the appreciation of the won. We will spend it on public safety and stabilization of the domestic economy,” Finance Minister Choi Kyung-hwan said yesterday at his first workshop on normalizing the public sector held at the government center in central Seoul yesterday.

Thanks to the appreciation of the Korean won against the U.S. dollar, the public sector’s foreign debt has shrunk. In addition, energy companies such as Korea Electric Power Corporation and Korea Oil Corporation have been able to import energy at a lower cost.

"The current economic team will maintain the public sector normalization plan with consistency,” Choi said. “It is important to maintain the momentum on reducing public institution debt, but at the same time make a contribution to the domestic economy.”

The finance minister added that starting in October, the government will set the ceiling for total debt to assets at 60 percent for 16 government agencies and public companies that are under intense pressure to reduce their total debt load. Such debt includes treasuries, corporate bonds, commercial paper and even asset-backed securities. By lowering the debt-to-asset ratio by 1 percentage point a year, the government plans to reduce the ratio to 55 percent by 2019.

The total debt of the 16 institutions totals 380 trillion won, of which treasuries and corporate bonds account for 59.8 percent, or 227 trillion won. 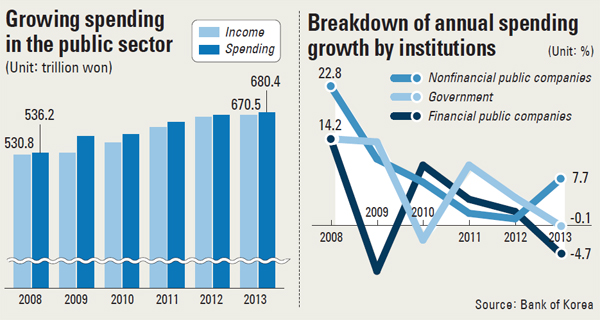 Since the second half of last year, the Park Geun-hye administration has been pushing for normalization of the debt-ridden public sector. Hyun Oh-seok, then the finance minister, threw down the gauntlet when he declared, “The party is over.”

According to a study released by the Bank of Korea yesterday, earnings of more than 5,300 government agencies and public companies were 670.5 trillion won in 2013. Spending was 680.4 trillion won, resulting in a deficit just shy of 10 trillion won.

“Although spending by the public sector saw modest growth, the 9.9 trillion won deficit was largely due to the significant drop in tax collections,” said a BOK official.

When breaking down the numbers, the government and financial public companies posted a surplus, with most of the deficit generated by nonfinancial companies.

Although earnings from public companies rose 6.8 percent from a year earlier, spending rose 7.7 percent. As a result, the deficit grew from 21.3 trillion won in 2012 to 24.3 trillion won last year.

This year, the situation may get worse despite the government’s efforts, as tax collections are expected to be 8 trillion to 10 trillion won short of the target due to the sluggish domestic market.

The central bank last month revised its economic growth outlook from 4 percent to 3.8 percent, while the Finance Ministry followed suit by shaving off 0.2 percentage points off its earlier outlook to 3.7 percent.

A report released by the National Assembly Budget Office early last month showed that in 2012 and 2013, the government failed to reach its goal of securing additional taxes by reducing some benefits and changing tax regulations.

The government’s initial goal was an additional 15.3 trillion won over the two years, but it took in only 25.5 percent, or 3.9 trillion won, a shortfall of 11.4 trillion won.