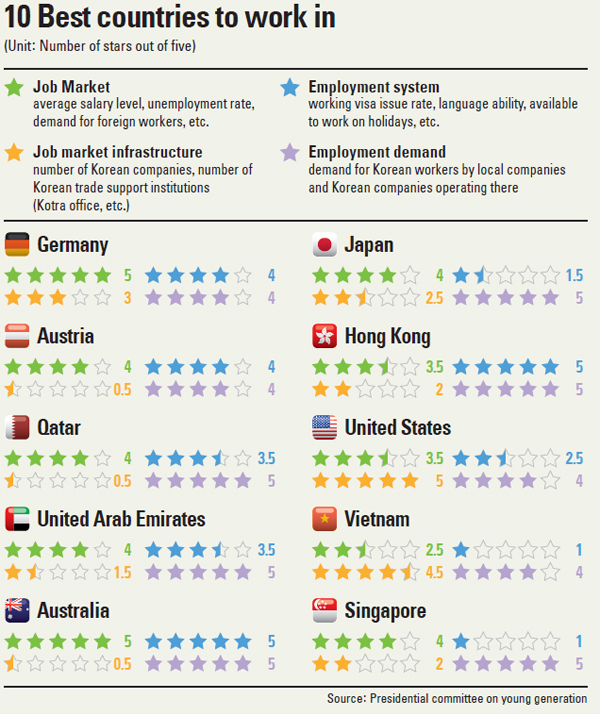 The Presidential Committee on Young Generation on July 24 released its list of the 10 most attractive countries for Korean job seekers, ranging from Germany to Vietnam.

The countries that made the list have the best conditions for Korean workers, largely due to efforts by the government and businesses to expand trade relationships, particularly in the Middle East and Europe.

The list ranks Germany as No. 1, followed by Austria, Qatar, the United Arab Emirates, Australia, Japan, Hong Kong, the United States, Vietnam and finally Singapore. The top 10 were chosen in a study of 103 nations where Korean businesses currently operate and is based on demand for foreign workers, the country’s business relationship with Korea, the average salary, the unemployment rate, and the number of new foreign-owned businesses.

The study was conducted by a research team led by Korea Polytechnic University Professor Seo Jong-hyen based on data provided by Korea Trade-Investment Promotion Agency (Kotra) and the Human Resources Development Service of Korea. The 103 countries were narrowed down to 45 based on per capita gross domestic product, economic growth and foreign direct investment and final 10 were selected based on the job market.

“Traditionally, North America and Europe have been the most desirable destinations for young Korean job seekers,” said Yi Do-kyeong at the Human Resources Development Service. “However, emerging countries in Asia and the Middle East can be an even better choice … for young people in building up strong career experiences.”

Yi said that foreign companies with ties to Korea - through the owner, manufacturing Korean brands, or by joining a consortium with Korean companies - were more likely to hire Korean workers.

Of the top 10 countries in Asia, Japan and Singapore showed the highest demand for foreign talent and fewer barriers to obtaining a visa, largely due to a work-force shortage. According to the study, Japan is open to foreign workers who want to enter industries that lack Japanese professionals, such as IT and mechanical engineering.

The data says the country will need to fill positions for at least 500,000 IT professionals by the end of 2015, including software developers. Like Japan, Singapore is scheduled to create about 80,000 IT-related jobs by December 2015. Singapore also lacks financial specialists, hotel managers and art curators and both countries have high demand specifically for Korean employees.

Hong Kong scored the best for ease of obtaining a visa and had the highest demand for Koreans, since it is Korea’s sixth-largest trade partner and there are many Korean businesses there. The country recorded a low unemployment rate of 3.3 percent last year, and has openings in finance, hotel and restaurant management and shipping.

Vietnam was picked for its abundance of Korean companies and of their strong network in the country. As Korean businesses have been gradually moving their production and shipping lines out of China for a decade, Vietnam’s demand is high for Korean workers with a bachelor’s degree who want to work in managerial positions. A recent memorandum of understanding between the Korean and Vietnamese governments agreed to waive the requirement of five years of work experience to qualify for a management position, as long as the applicant’s certifications are recognized by the Korean government. The country also has openings for jobs in its airlines industry.

Because Korean companies have recently signed contracts in Qatar and the UAE in sectors from construction and energy to medical and service industries, the two nations were picked for their large demand for Korean workers and for their good job market.

Qatar had one of the lowest unemployment rates in 2012 at 0.7 percent. About 90 percent of workers in the UAE are foreigners and work visas are not complicated. The countries showed high demand for construction and shipbuilding engineers, hotel managers, airline workers and medical professionals. The study also recommended Saudi Arabia, Kuwait, Turkey and Israel.

In Europe, Germany and Austria had healthy job markets and high demand for Koreans to work in the IT, machinery and auto industries. Germany has a strong technology industry and its steady economic growth will lead to demand for five million tech professionals by 2025. Because of this, the country recently decided to ease its policies for working visas.

Austria has the lowest unemployment rate in the European Union at 4.7 percent and is loosening its visa restrictions to attract professionals in shipping, retail and IT. The Netherlands, Norway, Sweden, Switzerland and France were also recommended in the study.

As a lot of Koreans work in the United States and Australia, strong business connections are already in place. Available positions in those countries include IT professionals and engineers, but most workers enter the countries on internships or temporary jobs.