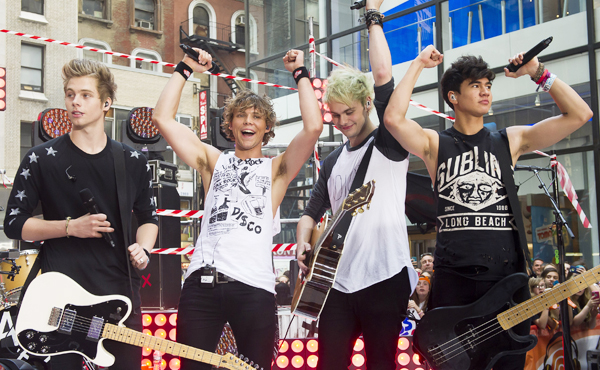 LOS ANGELES - Australian pop-rock group 5 Seconds of Summer scored one of the year’s biggest debuts on the weekly Billboard 200 chart on Wednesday, cementing its status as the latest boy band to conquer the United States.

The band’s debut self-titled album sold 259,000 copies in its first week, according to figures from Nielsen SoundScan. It became the third-most streamed album on music platform Spotify, with more than 4.4 million streams last week according to the platform.

For 2014, the album’s first-week sales trailed only Coldplay’s “Ghost Stories,” which debuted with 383,000 copies in May and Eric Church’s “The Outsiders,” which opened with 288,000 in February.

5 Seconds of Summer, formed by Luke Hemmings, Calum Hood, Ashton Irwin and Michael Clifford, built a following as an opening act for British boy band One Direction over the past year. This year, its popularity grew with the single “She’s So Perfect,” which is on the debut album.

Only two other new entries made the top 10 of the Billboard 200 chart this week. Rapper Common’s “Nobody’s Smiling” came in at No. 6 and metal band Crown the Empire clocked in at No. 7 with “The Resistance: Rise of the Runaways.”

For the week ending July 27, overall album sales totaled 4.3 million units, down 9 percent from the comparable week in 2013, Billboard said.