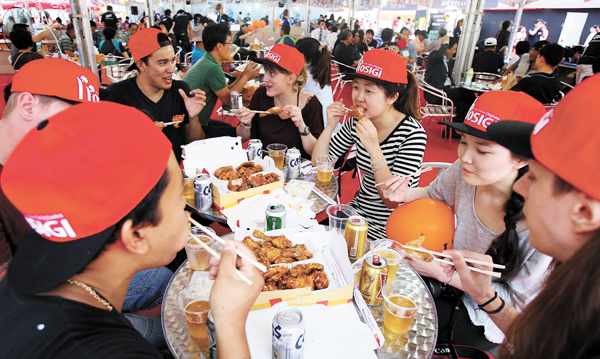 International students from Yeungnam University enjoy fried chicken and beer, often called chimaek in Korean, during the second Chimaek Festival held in Daegu last month. Riding on the popularity of chimaek in and outside of Korea, the young event attracted 100,000 festivalgoers alone on the eve of its first day. By Gong Jeong-sik

DAEGU - It was a sweltering summer weekday, but a throng of people began to flock to Duryu Park in Daegu at around 3 p.m. They were there to celebrate the eve of the second Chimaek Festival, a one-of-a-kind event that is dedicated to the combo of deep-fried chicken and beer, often called chimaek for short in Korean.

The festival took place between July 17 and 20.

In order to enter the world of chimaek, the first thing you do is to pull out your identity card. Once you prove you’re old enough to attend the festival, you can indulge in a whole chicken that some claim has more than 1,000 kilocalories.

Mun Pil-guk, a college freshman who attends Yonsei University, was one of those in attendance. He had come all the way down from Seoul.

“Fried chicken is a lot cheaper than other delivery food,” said Mun. “With a box of deep-fried chicken, you can get as full as you want.”

As well as the younger generation, older people in their 40s, 50s and 60s and foreigners were spotted at the spacious park.

After the sun went down, it began to rain. But more people, mostly company workers, showed up to cool themselves down. And when the venue was packed with people, the rock group No Brain took to the stage, at around 9 p.m., and the festival reached its climax.

About 100,000 revelers visited the festival on the day in question, a high number for an event in just its second year.

But even before the inception of the festival, Duryu Park was a well-known gathering place for chimaek lovers. People living in the hottest city in Korea pour into the park with picnic mats and chimaek whenever the mercury levels go up.

That was the beginning of this unheard-of festival, which is catching on among Koreans who can’t live without chimaek, especially during summer.

Thanks to the popularity of the Korean drama series “My Love from the Star” in China, chimaek is also gaining in popularity there.

Riding on the popularity of the Korean drama series, chimaek is being exported to China. Ningbo, a Chinese city, asked Daegu if they could hold the same festival, which took place on Monday and Tuesday. 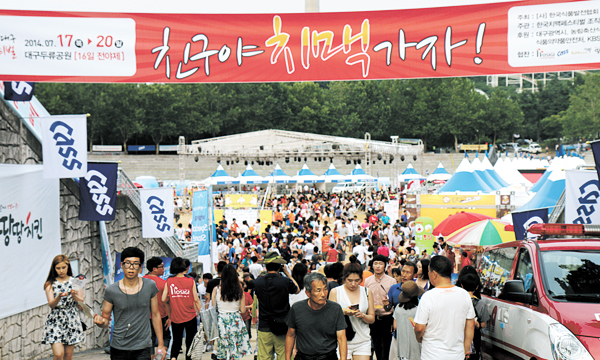 The second Chimaek Festival held in Daegu came to an end late last month with a large number of visitors. Provided by the organizer

Chimaek has become a distinctive part of Korean culture and there are numerous statistics to prove it.

A marketing research institute of KB Financial Group ran an analysis last year, which reported that there are 31,000 deep-fried chicken joints across the nation. That means there is a single deep-fried chicken place for every 1,500 Koreans.

In addition, about 800 million chickens are consumed every year and there are 250 chicken brands competing with one another.

Most recently, the Institute of International Education at Kyung Hee University released a survey saying that a majority of international students chose chimaek as the Korean dish that is most impressive.

“Daehanminguk Chickenjeon” roughly translates into “the chicken story of the Republic of Korea.”

In the book, Jeong describes fried chicken as “troubled food” because the popularity of the cuisine points to many societal issues such as youth unemployment, early retirement and power struggles between franchise companies and the self-employed who invest all their severance pay into chicken eateries.

So when did Koreans begin eating deep-fried chicken?

Back in the 1950s and ’60s, the most prevalent way of cooking a whole chicken was to boil it with sticky rice, ginseng and dried dates, called Samgyetang. It was a healthy invigorating summer treat.

In 1960, however, the forerunner of deep-fried chicken surfaced at Myeongdong Yeongyang Center in Seoul. The restaurant began to sell whole chicken by grilling it in an electric oven, which became a popular snack.

But Lims Chicken is considered the first fried chicken joint in 1977. The arrival of KFC in 1984 from the United States also played a part in pushing samgyetang aside.

Fried chicken instantly became a favorite of children, but the 1982 advent of coating the bird in a sweet and spicy sauce even attracted older people who had previously shunned fried chicken for its greasiness.

BBQ Chicken, which is the No. 1 player in the deep-fried chicken market, began to expand its franchise business aggressively when the entire nation was struck by the financial crisis.

Men in their 40s and 50s who were laid off from their companies began to open chicken franchises with their lump-sum pensions. Anyone could open a chicken joint after a few days of education from a franchise headquarters. 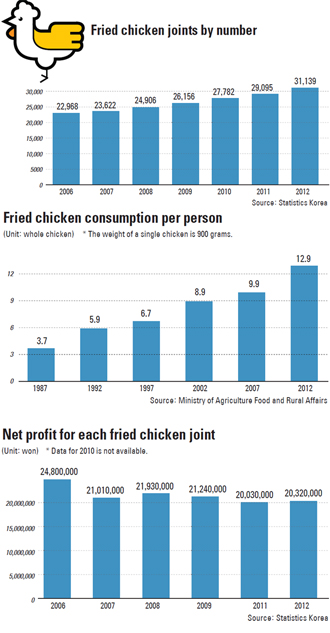 If the Asian financial crisis increased the number of fried chicken eateries, the 2002 World Cup co-hosted by Korea and Japan accelerated the growth of the fried chicken industry even further.

Koreans needed something to munch on while watching football games, which is where the combo of deep-fried chicken and beer came in.

As of 2002, the number of deep-fried chicken joints soared far higher than demand.

“The fried chicken market is already saturated,” said Park Min-cheol, who was participating in the chimaek festival. He runs a franchise fried chicken restaurant.

“I can feel that people look down on me as a person who has nothing to do other than running a fried chicken place .?.?. But I’m positive about my business. If I give it all to my work, I believe there will be a chance of making it big even if the market is already competitive.”

The report from the KB Financial Group said four out of five chicken restaurants shut down 10 years from opening. The average survival period of a single fried chicken place is two years and seven months.

Even the Wall Street Journal ran a story last year about the so-called “chicken bubble,” with the headline “Why Fried Chicken is Battering South Korea’s Economy.”

Fried chicken is also often used as a medium to satirize our lives.

It may make people laugh, but it also reflects the insecurity that is prevalent in our society. 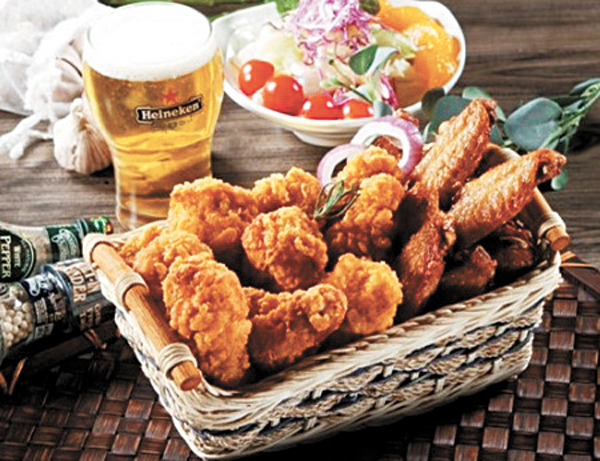 The most popular part of the chicken among Americans is the breast while Koreans largely prefer to eat legs.

Koreans also tend to raise smaller breeds of chicken because they are used in samgyetang, or chicken soup boiled with ginseng, which is a popular dish here. For this reason, an average chicken grown in the U.S. and other countries weighs about 2.5 kilograms (5.5 pounds) but the average weight of Korean chickens is 1.5 kilograms.

“Most deep-fried chickens are cooked with local chickens but chicken fillets are usually made with imported chickens,” said Lee Hong-jae, a vice chairman for the Korea Poultry Association.

Many people consider deep-fried chicken and cool beer to be a heavenly combination, but this is not true according to many nutritionists.

When a cool beverage is consumed with deep-fried food, it often causes stomachache or diarrhea. Chimaek is also considered a culprit for gout.

In “Daehanminguk Chickenjeon,” a book on fried chicken, author Jeong Eun-jeong writes, “The average Korean doesn’t like greasy food, thus they try to diminish the greasiness by eating it with cool beer or with spicy and sweet sauce.”

While English farm owners in the United States tended to eat roasted poultry, Scottish immigrants are believed to have popularized fried chicken. Spices were later added to the coating by African cooks who were enslaved on plantations in the American South.

The birthplace of the U.S. style of fried chicken is believed to be Kentucky and Louisiana.