Household debt in June the highest in 12 months

Household debt in June the highest in 12 months 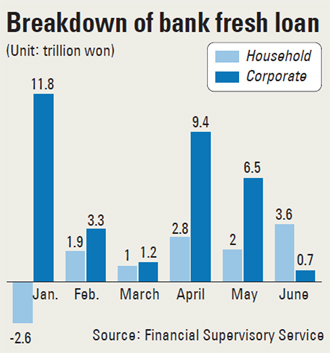 The June data comes after the government announced a package of economic stimulus measures that includes relaxing the loan-to-value and debt-to-income ratios for mortgage loans to boost the real estate market.

In addition, there is speculation the central bank will lower its benchmark interest rate this month to support the government’s stimulus campaign.

While household debt continues to expand, the value of new corporate loans has decelerated.

The mortgage overdue payment rate fell 0.05 percentage point from May to 0.55 percent.

The situation wasn’t bad even in corporate loans, which saw a 0.23 percentage point drop in the overdue payment rate from the previous month to 0.94 percent. But it rose 0.02 percentage point compared to a year ago.

Conglomerates and small and midsize companies saw their overdue payment rate fall from the previous month.