Wrist sidelines Nadal ahead of the U.S. Open

Wrist sidelines Nadal ahead of the U.S. Open 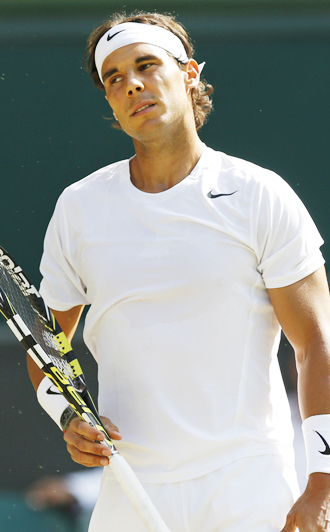 Rafa Nadal will miss two U.S. Open tune-up events with an injury to his right wrist that has put his status in doubt for a title defense at the year’s final grand slam event.

Nadal, who hurt the wrist during practice, will have to wear a cast for two to three weeks, forcing him to withdraw from next week’s Rogers Cup in Toronto and the following week’s Cincinnati Open.

“Depending on the evolution of the injury that will be carefully followed by the doctors, including MRI tests, it will be decided when to return to competition, initially scheduled for the U.S. Open,” Nadal’s publicist said.

The world No. 2, who won the Canadian and Cincinnati titles last year, felt pain during practice in Mallorca and tests later revealed the injury, according to the publicist.

The injury will delay Nadal’s start to the North American hardcourt season and his preparations for the Aug. 25-Sept. 8 U.S. Open in Flushing Meadows.

“I’m extremely disappointed that I am unable to defend my Rogers Cup title this year,” the 14-time grand slam winner said in a statement released by tournament organizers.

“Unfortunately, I injured myself yesterday during practice and after checking with my doctors I will have to stay out of competition for at least 2-3 weeks.”

A three-time winner on the Canadian hardcourts, the event has traditionally marked the start of the Spaniard’s buildup to Flushing Meadows and marks only the second time since he made his Rogers Cup debut in 2004 that he has missed the stop.

“We know Rafa is a fan favorite and our fans will be upset by his absence,” said Karl Hale, Rogers Cup tournament director. “But we also know that if Rafa could play, he would, as he has great respect for our event and his Canadian fans.”