Samsung builder No. 1 in ministry evaluation

Samsung builder No. 1 in ministry evaluation 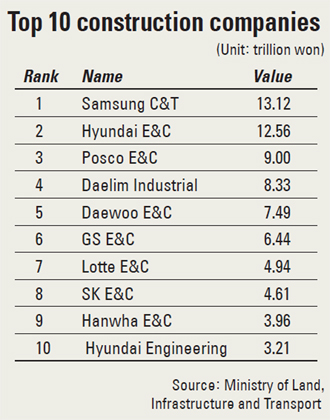 Samsung Construction and Trading topped the construction capability evaluation from the Ministry of Land, Infrastructure and Transport for the first time in nine years, beating Hyundai Engineering & Construction.

The ministry said yesterday that the builder under Samsung Group was named No. 1 in Korea for its construction capability valued at 13.12 trillion won ($12.72 billion) in general civil engineering.

The annual construction capability evaluation measures a company’s performance based on construction contracts, business management, technical ability and brand credibility. The rankings are used to determine a company’s qualifications ahead of bidding on public projects. The government evaluated 53,702 companies this year.

Samsung C&T, which placed second last year, rose to the top due to successful projects like the Roy Hill mine in Australia, the Samsung semiconductor factory in Xi’an, China, and the Kuraya power plant in Saudi Arabia. By sector, the builder also placed first in construction for dams, railroads, subways and power plants.

Hyundai E&C, an affiliate of Hyundai Motor Group, was pushed to second place. Its construction capability value was at 12.57 trillion won. The company placed first for building roads and bridges, harbors and industrial facilities.

Posco E&C moved up two places to rank third with 9.22 trillion won. It was first in sewage system construction and mining facilities. Daewoo E&C, which was third last year, slid to fifth at 7.49 trillion won, but kept its No. 1 status in residential building.

The new top 10 finisher was Hyundai Engineering, which placed 54th last year. The company was 10th, at 3.21 trillion won, due to its merger last year with Hyundai Amco, an affiliate of Hyundai Motor Group.

“With a decrease in public construction projects, companies who relied on those projects didn’t do well, while builders who focused on buildings houses saw their rankings increase as the property market recovered,” the Construction Association of Korea said in statement.