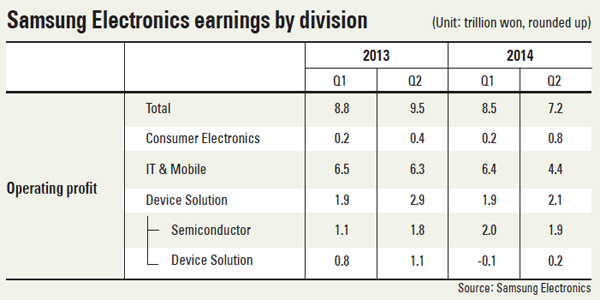 As forecast in preliminary guidance issued on July 8, Samsung Electronics’ profits for the second quarter recorded an earnings shock with its operating profit dropping 24.6 percent and sales declining 8.9 percent over the same period last year, the company announced yesterday.

An earnings shock was expected by the local stock market and security firms but the operating profit was 10 percent lower than the average estimate of 8.1 trillion won.

Samsung Electronics held a conference call yesterday in which the company said it will maintain its interim dividend, which drew interest from investors, saying that the board of directors decided to keep it the same as in 2013 at 500 won per share.

“As we provided in the key factors for the weaker-than-expected second quarter results when we released the preliminary guidance on July 8, the Korean won appreciated against the U.S. dollar and most of the foreign currencies during the second quarter, which negatively impacted our operating profit by approximately 500 billion won,” said Robert Yi, head of Samsung Electronics’ investor relations team.

“Tablet sales also declined due to weak global demand. Sales of OLED displays improved quarter-on-quarter, but the growth was less than expected.”

The electronics giant said that the earnings will not likely be recovered easily next quarter, implying that the bad results were not just a one-off.

In the conference call, Kim Hyun-joon, senior vice president of mobile business at Samsung Electronics said that sales of smartphones will increase in the third quarter compared to the second quarter with the launch of a flagship model and another premium phone. But he said the company cannot guarantee a higher profit.

“Due to the increased competition between smartphone manufacturers, it seems difficult to expect an improvement in operating profit for the third quarter,” Kim said.

In the second quarter, demand for UHD TVs surged and the consumer electronics division posted a 300 percent quarter-on-quarter sales increase and a 79 percent rise in operating profit from the previous quarter.