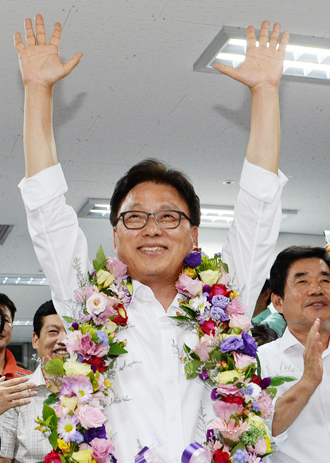 Park Kwang-on celebrates his victory in Wednesday’s by-election. He was one of four winners from the opposition. [NEWS1]

Following the ruling Saenuri Party’s 11-4 landslide victory in the by-elections on Wednesday, Park Kwang-on, who won Suwon District D, has drawn public attention as the only victor from the main opposition New Politics Alliance for Democracy (NPAD) from outside the Jeolla provinces, the area considered as the liberal stronghold.

Though Park’s approving rate is expected to have increased after Chun Ho-seon, another opposition candidate from the Justice Party, gave up the race on July 24 to throw his support behind him, some political observers have pointed out that the Twitter posts by Park’s daughter greatly contributed to his come-from-behind win.

His victory is particularly surprising because he was considered an underdog according to most polls conducted before the vote, lagging far behind the ruling party’s heavyweight Yim Tae-hee, who formerly served as the presidential secretary in the Lee Myung-bak administration.

Park’s daughter - who identified herself only as an “undutiful daughter” in one post - opened the Twitter account (@snsrohyodo) on July 16, where she often posted comments about her father.

That she set up a social media account to promote her father’s run for the National Assembly might sound warm-hearted and loving, but it was actually her sarcastic and mocking descriptions of Park that made her Twitter page so popular.

“He’s not that famous, even after covering important events such as the fall of the Berlin Wall, the Gulf War and the opening of the Antarctic King Sejong Station as a reporter, and working as an anchor of the weekend 9 o’clock news, and as a host on a famous debate program,” one comment read. “I believe Mr. Park Kwang-on hasn’t become famous enough because he is ugly, and a man with too little charisma to captivate an audience.”

Thanks to her hilarious mentions, she garnered more than 10,000 Twitter followers in the first three days. That number reached more than 12,500 as of yesterday.

Her way of advocating for her father was new for most people, and Park’s aides weren’t particularly happy with those posts. But she continued to upload her wry commentary.

“I just got a call from an aide [of my father] telling me to stop tweeting,” read another post on July 16. “But his call cannot stop my filial online duties because my persistence was inherited from Mr. Park Kwang-on.”

Instead, she became more aggressive, saying that Park has a big head, and was an “ethical but boring man.” She even uploaded a picture of her father, sitting at a gathering with other NPAD politicians and candidates, commenting that “Park’s big head ignores perspective.”

But while her posts about her father weren’t so affectionate, when the votes tallied indicated that he was likely to be elected on Wednesday, she left supportive commentary: “Hurray for Twitter!” she wrote, and “Thank you, everyone!”

She also left congratulatory messages for her father.

“I hope you will be a lawmaker who cares about every single person’s opinion and who makes reasonable decisions based on it,” she wrote. “I sincerely congratulate you on your victory.”

Park himself even admitted in an interview with the SBS radio yesterday that the sarcastic tweeting played a part in his win. “It was unpredicted, and my aides seriously worried about it,” he said. “But given that young people were asking me about [her Twitter account] during the campaign, I assume it helped my presence among the youth.”

The Twitter page is still open, though Park’s daughter said in a post yesterday that she will shut down the account in a couple of days.