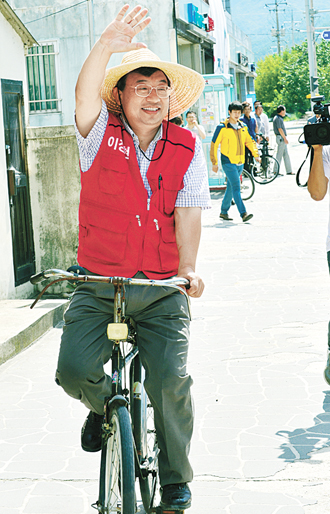 Lee Jung-hyun thanks voters yesterday in Gokseong, South Jeolla, for their support. [NEWSIS]

The victory in Wednesday’s by-elections of the Saenuri Party’s Lee Jung-hyun in Suncheon-Gokseong, South Jeolla, was the scenario that was too outlandish even to be hoped for, but turned out to be the ruling party’s biggest surprise.

Lee, former presidential secretary for pubic affairs, defeated Suh Gab-won of the New Politics Alliance for Democracy, and by a convincing margin of 9 percentage points, broke an 18-year-old tradition in Jeolla that only liberals could be sent to Seoul. This is also the first time in 26 years that a conservative candidate has won a National Assembly seat in the southern half of Jeolla, which is even more liberal than North Jeolla.

Lee was born in Gokseong County; Suh, a two-term lawmaker noted as a Roh Moo-hyun loyalist, is from Suncheon City. Although Suncheon has nearly nine times the population of Gokseong, Lee outpolled Suh in both places, a feat that will be studied closely by both political scientists and practical politicians. Representative Min Hyun-joo, the Saenuri spokeswoman, went so far as to hail Lee’s victory as “a revolution.”

“Many polls before the by-election showed that Lee was ahead,” she said in an interview yesterday with a Seoul radio station. “But we didn’t easily trust the results because regionalism is extremely dominant in Korean politics and our party had failed so far in persistent efforts to destroy the practice.”

“The fact that Koreans have been divided by regions for such a long time is an enormous stumbling block to national and political development and exhaustive,” said Lee, a rare species in the Saenuri, where the majority of members are from the conservative Gyeongsang region. He was speaking with the press in Suncheon yesterday. “Despite its extremely irrational nature, the practice has been left intact and sometimes encouraged by some political factions. The persistent trend has led voters to realize they should break the mold. Some people in their 20s and 30s showed a sense that the party is irrelevant when it comes to voting, and that seems to have also helped the change.”

He added that voters in Suncheon and Gokseong “took the initial step to change the politics of Korea.”

Those familiar with Lee’s background say his success didn’t come overnight. He is one of the most trusted men around President Park Geun-hye because of his intense and public loyalty to her before she won the presidency.

He failed miserably in the Gwangju Seo B District election in 2004, barely winning 1 percent of the vote.

He served as a proportional representative from 2008 to 2012, but came up short again in 2012 in the same district he had contested eight years earlier.

But that time, he won just under 40 percent of the vote; this time, in a different district, he promoted his candidacy by promising to “pour out a budget bomb on Jeolla” because of his close ties with the president.

His nickname is “Park Geun-hye’s mouth.” When he lost in the 2004 parliamentary election, Park, then leader of the main opposition Grand National Party, hosted a lunch to console him and encourage him not to “give up on Jeolla.”

Just a few days later, Park appointed him as the party’s deputy spokesman; he later became senior presidential secretary for political affairs when Park went to the Blue House in February of 2013. He was transferred laterally to the presidential office for public affairs four months later.

When asked by reporters if President Park called to congratulate him on his victory, he was already leaving for his next stop - but flashed a wide grin.