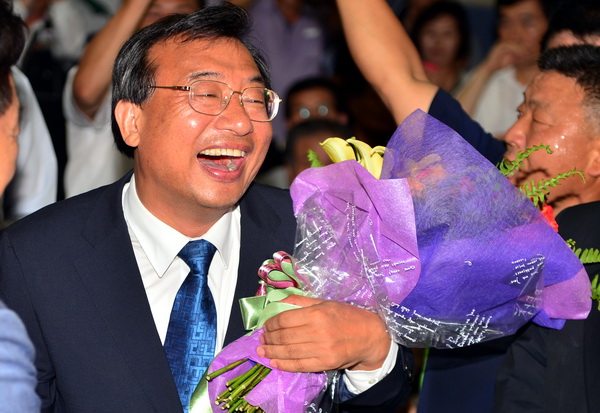 
The ruling Saenuri Party yesterday swept 11 of the 15 contested races, achieving a landslide victory in the largest-ever by-elections that were seen as a midterm referendum of President Park Geun-hye’s conservative government.

With much better-than-expected election outcomes, the Saenuri now commands the loyalty of 158 lawmakers, reclaiming an absolute majority in a 300-member National Assembly and giving the Park government strong momentum to push through a number of reform-minded and deregulatory measures to revive the economy.

The most unexpected outcome came from a race in Suncheon and Gokseong in South Jeolla, where former senior presidential secretary Lee Jung-hyun of the Saenuri defeated NPAD candidate Suh Gab-won, a loyalist to former President Roh Moo-hyun. Lee’s victory marked the first time for 26 years that a conservative party candidate was elected in South Jeolla, a traditional opposition stronghold, and is seen as a meaningful step in breaking the thick layer of regionalism in Korean politics.

In a most watched race in Dongjak B District in Seoul, the only race waged in the capital, former judge Na Kyung-won of the Saenuri beat out Roh Hoe-chan of the minority Justice Party with 38,311 votes to 37,382. With her victory, Na will come back to the National Assembly with bolstered potential for a presidential bid, political observers say. 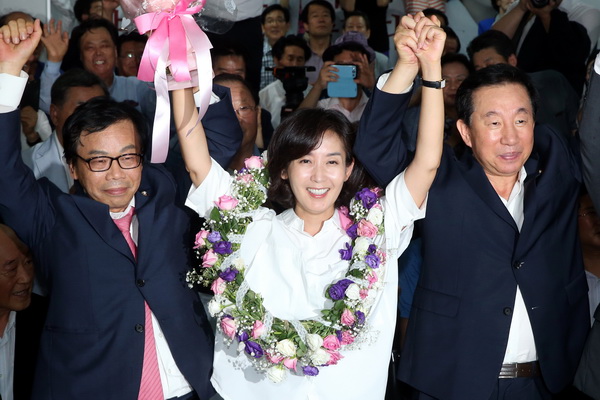 In Suwon C District, political heavyweight Sohn Hak-kyu was defeated by Saenuri runner Kim Yong-nam by a margin of 7.77 percent. The outcome is especially painful for the former university professor because he was thought of as a potential presidential hopeful in the 2017 election.

Park Kwang-on, a former TV journalist, defeated Yim Tae-hee, a former presidential secretary in the Lee Myung-bak government, with 39,461 votes to 34,239 in the Suwon D District race. Park’s election was the only victory the NPAD garnered in the six races contested in Seoul and Gyeonggi, which were considered pivotal.

For races in Gimpo and Pyeongtaek in Gyeonggi, two Saenuri candidates were elected.

The ruling Saenuri also managed to carry all three races waged in two Chungcheong provinces known as swing states. The Saenuri’s victories in the three races were a turnaround for the ruling party from the local June 4 elections, in which it failed to produce a single metropolitan government chief in Chungcheong regions.

Other than winning in the Suwon D District race, the NPAD only managed to carry three seats in Gwangju and South Jeolla, its traditional powerbase. NPAD candidate Kwon Eun-hee, a former police official, was elected in a Gwangju District with 60.61 percent of votes.

The voter turnout yesterday came to 32.9 percent, a figure lower than expected likely because voting day was not an official holiday and occurred in the middle of the summer vacation season. It is generally thought a higher voter turnout works in favor of the opposition, which hoped more than a 40-percent turnout for yesterday’s elections.

The stunning defeats for NPAD candidates yesterday have dealt a huge blow to the leadership of Co-chairmen Kim Han-gill and Ahn Cheol-soo, who have led the party since its founding in March. It is expected the two will offer to resign to take responsibility for the underperformance.