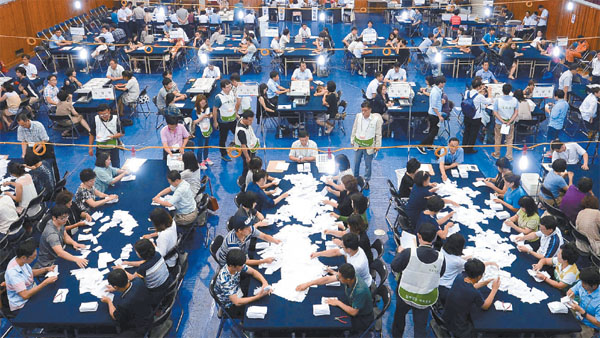 Election watchdog officials tally votes for Dongjak B District, southern Seoul, yesterday in a high school gymnasium. Overall turnout yesterday remained lower than 40 percent, likely because voting day was not an official holiday and occurred in the middle of the summer vacation season. [NEWSIS]

Voters around the country cast their ballots yesterday in Korea’s largest-ever by-elections, in which 15 seats were up for grabs.

As of 9:50 p.m. yesterday, the ruling Saenuri Party was leading in 11 of the 15 contested races, though it was too early to tell last night which party would emerge victorious.

If the Saenuri maintains its lead in those 11 races until the last vote is counted, it would constitute a sweeping victory for the ruling party as well as a humiliating defeat for the opposition New Politics Alliance for Democracy.

In the closely watched race for Dongjak B District, the only election contested in Seoul, former judge Na Kyung-won of the Saenuri was ahead of Roh Hoe-chan of the Justice Party with 2,882 votes to 2,221, with 7.3 percent of votes counted. Should Na defeat Roh, a popular liberal, she could come back to the National Assembly with bolstered potential for a presidential bid, political observers say.

In the five races up for grabs in Gyeonggi, considered pivotal for their proximity to the capital, the Saenuri was leading in four races as of press time yesterday.

In Suwon B District, former prosecutor Chung Mi-kyung, who ran on a Saenuri ticket, was ahead of her rival Baek Hye-ryun, also a former prosecutor, with 904 votes to 414 as of press time, with 2.15 percent of votes counted.

Park Kwang-on, a former TV journalist, was slightly ahead of his Saenuri opponent Yim Tae-hee, a former presidential secretary in the Lee Myung-bak government, with 13,291 votes to 12,621, with 35.02 percent of votes counted, in the Suwon D District race. It was too early to tell the outcome.

For races in Gimpo and Pyeongtaek in Gyeonggi, two Saenuri candidates maintained their lead.

For the race in Suncheon and Gokseong County in South Jeolla, which drew widespread attention because of the mounting possibility that the Saenuri could clinch the opposition’s traditional stronghold, Saenuri runner Lee Jung-hyun was leading NPAD candidate Suh Gab-won with 4,256 votes to 1,456, with 4.95 percent of votes having been counted.

The Suncheon race saw the highest voter turnout yesterday at 51 percent, likely a reflection on the high interest in its outcome. If Lee pulls off a victory, it would mark the first time ever that a Saenuri candidate clinched a victory in South Jeolla.

Though NPAD candidate Kwon Eun-hee was certain to win in a Gwangju district race, she saw the lowest voter turnout yesterday, which came to 22.3 percent - more than 10 percent lower than the overall average yesterday.

Such a disappointing result was interpreted as a reflection of the negative sentiment in the NPAD’s traditional stronghold toward the former police official, who was accused of trying to hide her husband’s real estate assets to pay less taxes.

Voting lasted for 14 hours from 6 a.m. until 8 p.m. yesterday at 1,003 polling stations across 15 constituencies nationwide. The ruling Saenuri and the opposition NPAD saw the elections yesterday as a midterm referendum on President Park Geun-hye’s conservative government.