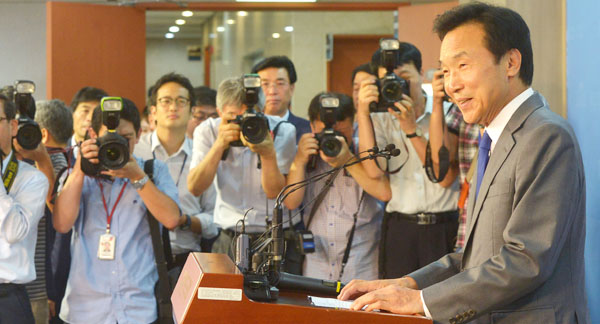 Sohn Hak-kyu announces yesterday that he will retire from politics during a press conference at the National Assembly. [NEWSIS]

Only hours after the joint leaders of the main opposition New Politics Alliance for Democracy (NPAD) stepped down to take responsibility for the crushing defeat in by-elections Wednesday, Sohn Hak-kyu announced he would retire from politics after losing against a political newbie from the ruling Saenuri Party.

“I am giving up on politics today,” the veteran politician said at a press conference yesterday afternoon at the National Assembly. “I failed to be chosen by the voters and I am humbly accepting the results.”

He continued: “I had this thought that politicians should know when to step in and step out. It is also part of my philosophy to live according to the flow of life and I am following it by stepping down…I am winding up the dream to create a world where everyone can proudly work and enjoy and not be isolated. I will sincerely lead a life of a citizen from today.”

Sohn ran for a parliamentary seat in the Suwon C District but was defeated by a former prosecutor, Kim Yong-nam, by a margin of nearly 8 percentage points.

He has a doctorate in political science from Oxford University and began his political career in 1993 when he was a political science and diplomacy professor at Sogang University. Following three terms as a lawmaker with the predecessor of the Saenuri Party, he served as minister of health and welfare in the Kim Young-sam administration and as Gyeonggi governor from 2002 to 2006.

Bidding for the presidency against Lee Myung-bak and Park Geun-hye in 2007, he left the Grand National Party to try his hand as a political liberal. The new clothes didn’t fit well: He failed in both 2007 and in 2012 to get the nomination. After nine months in Germany, he returned to Korea and planned his political comeback, which ended in ashes Wednesday.

His failure and retirement, if it sticks, could mean a significant change in the competition for the 2017 presidential election, because he had been considered one of the few attractive candidates.

And he is not alone. Several other well-known but disappointed candidates will probably join him in bowing out of politics, either temporarily or permanently, stung by the voters’ preference for new political faces. The sole survivor among the veterans is the former judge and candidate for Seoul mayor, Na Kyung-won, who beat Roh Hoe-chan of the tiny Justice Party in a closely watched race in Dongjak B District in Seoul. With the victory, Na became the sole female three-term lawmaker within Saenuri.

Her fellow Saenuri candidate Yim Tae-hee, a former presidential secretary and labor minister in the Lee Myung-bak administration, lost to the NPAD’s Park Kwang-on, a former TV journalist, in the Suwon D District race. The fact that he changed the district he would contest at the last minute, after preparing for a contest in Pyeongtaek, Gyeonggi, did not improve his chances.

From the NPAD, Kim Doo-kwan, a former South Gyeongsang governor, was defeated by Saenuri’s Hong Cheol-ho in Gimpo, Gyeonggi. Perhaps testing his appeal outside his Gyeongsang stronghold, Kim did not get the answer he desired.