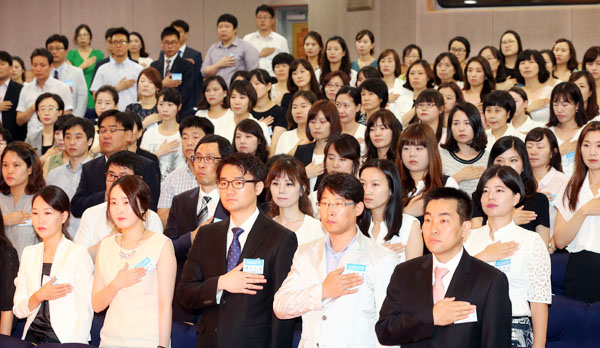 At a ceremony yesterday to celebrate the acceptance of Korea’s first part-time public officials, which was held by the Ministry of Security and Public Administration at the government complex in Gwanghwamun, central Seoul, a group of 192 newly selected civil servants salute the flag. By Kim Seong-ryong

“Thanks to my job as a part-time civil servant, my husband and I don’t have to lead a weekend couple’s lifestyle anymore,” said Kim Seon-ju, a 31-year-old mother of two who was selected through a new program as a Grade 7 part-time official at the Ministry of Strategy and Finance.

Kim starts work at the government complex in Sejong City this month.

Targeting women - and men - in their 30s and 40s who had to quit their jobs because of familial and child-rearing duties, the government has for the first time selected part-time public servants, 192 in the first group.

The Ministry of Security and Public Administration launched the program to give people an alternative way of remaining in the work force and of landing civil service jobs despite family duties.

For seven years beginning in 2006, Kim worked as a researcher at the Korea Centers for Disease Control in Osong, North Chungcheong.

But her husband’s job forced him to move to Pyeongtaek, Gyeonggi, in 2010, throwing them into separate weekday lives and being together only on weekends. They had to send their second child, now 3, to a childcare center at just 6 months of age.

“Because it was too difficult to raise children while living separately, I quit my job,” she said.

Though she wanted to start to work again, Kim had been anxious because of her truncated work record. Then in February she heard of the plan to recruit part-time civil servants. She passed the documentary and interview screenings and was hired.

“I can leave my children at the government complex’s childcare facility and work mostly in the mornings,” Kim said.

She and her husband plan to live together in Sejong City and he will commute to his Pyeongtaek workplace.

The average age of the new hires in the program is 35, and over a quarter of them are men. The jobs are limited to 20 hours per week and can be adjusted for morning, afternoon or evening work.

“My husband is even happier that we can move into a Sejong City apartment and earn [an income] while living together,” Kim said.

In the same way, Choi Hee-kyeong, 45, was in need of steady part-time work in order to take care of her elderly mother, who suffered a stroke, and support the private academy fees for her daughter, now in her first year of high school.

Over the past 12 years, Choi has worked as a civil servant at the Gangnam District Office, Military Manpower Administration and Public Procurement Service. But she had to quit her last steady job when she began to take care of her sickly mother in 2008. She was working at the Gangnam Job Center as a when-needed employment consultant when she passed the screening to become a part-time civil servant.

She begins working as a Grade 9 official at the Gwanak Police Station in southern Seoul later this month.

Choi’s daughter said, “I am cheering for my mother, who looks the most energetic when she is working.”

Most of the new hires are assigned to less-demanding jobs such as drivers or librarians, but some were hired for expert positions such as interpretation and translation, accounting and legal affairs. Their salaries are about 58 percent those of a full-time civil servant.

In addition, they are not bound by civil service rules that prevent them from taking other jobs at the same time.