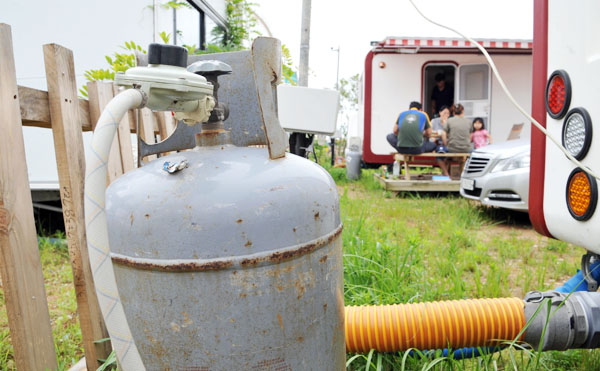 A can of liquefied petroleum gas sits outside of a caravan on July 18 at a campground in Incheon, exposed to the sun’s rays in the scorching heat. By Baek Dong-min

Despite the popularity of camping and other recreational outdoor activities among Koreans, a number of public camp sites nationwide appear to be lacking basic safety measures for visitors.

On July 18, when a reporter from the JoongAng Ilbo visited a campground in Incheon, where 45 caravans were lined up, liquefied petroleum gas (LPG) cans connected to each vehicle sat exposed to the sun’s rays in the scorching heat.

Fans of the outdoor units of air conditioners were also blowing warm wind toward them. Fire extinguishers were placed nearby, though they seemed inoperable, and when shaken, their contents felt inactive.

“LPG cans should be placed to avoid direct sunlight and rain,” said Lee Chang-wu, a fire and disaster prevention professor at Soongsil Cyber University, who inspected the site with the reporter. “The cans may explode if they are kept exposed to outdoor fans.”

On the same day, another camp site neighboring a valley in Miryang, South Gyeongsang, had electrical wires lying on the ground and among its trees. Distribution boxes were randomly placed, and no earth leakage circuit breaker (ELCB), which prevents shocks, could be found.

“Electric wires placed on the ground in disarray have the potential to cause electric shock,” Kim Yu-jin, a fire and disaster prevention professor at the International University of Korea, said in response to the observations.

When a team of reporters from the JoongAng Ilbo paid visits to 24 randomly selected camp grounds across the country between July 15 and July 18 with members of the Korean Institute of Fire Science and Engineering, most appeared to lack safety and prevention measures.

Lax management at campgrounds is largely due in part to insufficient requirements concerning their establishment and operation, experts say. Anyone can open a campsite as long as the grounds meet certain environmental regulations, such as those for sewage disposal.

The Ministry of Safety and Public Administration has outlined safety guidelines for these areas - it advises operators to secure a pathway for fire trucks and set up ELCBs, for example - however, those standards are not legally binding, giving managers the option of foregoing safety measures altogether, particularly those that are costly.

Experts say there should be more legal safety requirements established for camp grounds, particularly given that the number of safety accidents has sharply increased over the years. According to the National Emergency Management Agency, the number of accidents involving campers jumped to 3,004 in 2011, seven times that in 2009, at 429.

During the reporting trip, campers generally used LPGs or portable stoves for cooking at most public grounds, though only two out of 24 campsites had fire extinguishers. Twenty out of the 24 sites employed no health and safety manager, and 10 did not have a broadcast system in place to alert campers of emergency situations.

The campgrounds managed by local authorities weren’t any better either. One at Mount Palgong in Daegu had a designated tent site right next to a 70-degree cliff. Dozens of rocks are believed to have fallen down the slope.

“In case of torrential rain, rocks may fall on the tents,” Choi Yeong-sang, a fire safety management professor at Daegu Health College, commented.

Some areas within the camp site were also about 60 to 70 meters (200 feet) away from the road, making them completely inaccessible to emergency workers if a fire were to break out.

Those managing the campsite insisted, however, that authorities could use “a fire truck with long fire hoses” in such a situation.

There were no fire extinguishers present.

“Registering a camping ground must at least be mandated with minimum safety standards,” said Baek Dong-hyeon, the president of the Korean Institute of Fire Science and Engineering and a fire and disaster protection engineering professor of the Gachon University.

“They should at least be required to have a safety manager or place fire extinguishers.”