Have a whale of a time in Ulsan

Have a whale of a time in Ulsan 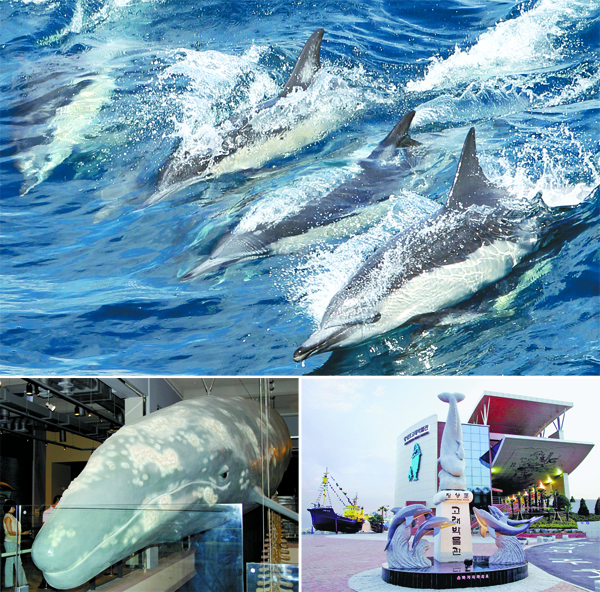 A whale museum, left and right, is now a tourist destination in Ulsan, which was formerly a renowned whale-hunting region. A boat ride is available where people can see dolphins, center. [JoongAng Ilbo]

If you want to get out of the city for a summer getaway but are eager for a vacation that avoids the all-too-familiar beach, mountain and valley scenes, why not try an animal-themed trip?

You could choose from various tours, including whale watching in Ulsan, horseback riding in Busan and swimming with dolphins in Geoje, South Gyeongsang.

Besides these activities, the southeastern coastline cities in question all offer beaches and scenic sites for more traditional holiday fun.

To most people, Ulsan is just an industrial city with a shipyard, but the city is also associated with whales. After all, it’s where the famous Bangudae Petroglyphs are located - 8,000-year-old rock engravings that feature some 300 creatures including various whale species.

The carvings also depict early men hunting for sea mammals, with experts assessing that they are likely the oldest petroglyphs to illustrate such an activity.

Although tourists can’t witness the rock engravings up close, they can observe them from afar through a telescope.

If you want a more active vacation experience, then head to Jangsaengpo, which is about an hour’s drive from the petroglyphs.

Jangsaengpo was a famous whale-hunting area until the 1980s but is now promoted as a “Special Whale Culture Zone” by the Ulsan government.

You could start your tour by visiting the Whale Museum to learn about the creatures and the history of whale hunting through various relics such as bones.

A water tank with four common dolphins inside is also situated at the facility. Visitors can examine them up close and personal at 11 a.m., 1 p.m., 3 p.m. and 5 p.m.

An opportunity to watch sea animals swimming in the ocean is also available.

At the dock next to the museum, you can hop on the Whale & Sea Tour Ferry, which can hold up to 399 people and sails at 13 knots. It explores Korea’s East Sea while searching for whales.

There is only about a 20 percent chance of spotting whales, but you can improve your chances by taking the trip during summer instead of spring or fall.

The boat schedule varies depending on the weather, so check it beforehand on the website, www.whalecity.kr.

Besides the whale-centric tour, there are also several other activities to take part in. 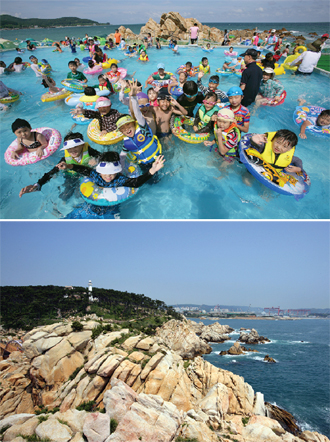 Mongdol Beach in the Dong District of Ulsan is famous for its black pebble beach. Listening to the stones rolling whenever waves come and go is a rare experience. The water here is so clear that a lot of scuba divers flock to the beach.

Although there isn’t a fancy hotel or any upscale accommodations at Mongdol, inns and pensions (a type of lodging similar to a bed and breakfast) are available near the coastal road.

“Our biggest charm is proximity to the beach,” said Park Mal-saeong, an inn owner. “As many tourists come, we have upgraded our facilities over time as well.”

Ulsan’s government has also opened a water park near Mongdol Beach, but if you’re looking for outdoor summer sports, such as wind surfing and yachting, head to Jinha Beach.

Also in Dong District is Daewangam Park, where oddly formed rocks and strangely shaped stones create a backdrop to the East Sea. There are also 15,000 pine trees in the park, which provide much-needed shade in the sizzling heat.

Another attraction in Ulsan is Yeongnam Alps, a chain of nine mountain peaks that tower more than 1,000 meters (3,280 feet) above sea level.

A picturesque sight greets visitors no matter which season they choose to visit in.

The valleys between the peaks are a cool sight, especially in the summer. If you’re looking for a Zen experience, there is a Buddhist temple situated nearby. Seoknam Temple, a hermitage exclusively for Buddhist nuns, was set up in 824 and offers a respite from everyday life.

A small tip: The water in the valley near the temple is as cold as ice if you are brave enough to dip your feet into it.