To swim with dolphins, go to Geoje

To swim with dolphins, go to Geoje 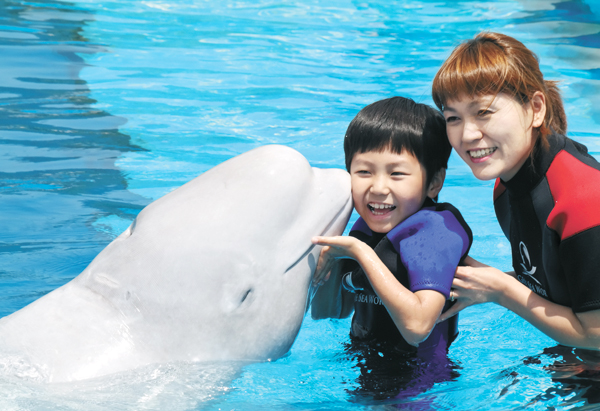 My recent visit to Geoje Sea World was with the Sea Trek program, the dolphin experience that made the facility famous in the first place.

The program, in which visitors wear oxygen-filled helmets and walk in water four meters deep (13 feet), is considered the only one in Korea where people are allowed to touch the animals freely.

However, taking a safety class first is a precondition. Although participants wear a diving suit at all times, they may experience pain from the water pressure and are therefore taught to lessen the discomfort by using various techniques.

Those who take part in the program are accompanied by a professional diver at all times, so there is no need to worry, even if you are not a good swimmer.

As I dived into the water, two large dolphins greeted me. I felt the surface of their bodies with my palms. It was as smooth as silk.

As instructed by the diver, I reached out and held my hand open, and one of the dolphins put its beak in my hand.

It was a surreal experience to interact with the animal and having its eyes meet mine. I threw food to the dolphins and they quickly swallowed it, along with some water. When I stretched out both of my arms, they came closer and pushed up my hands with their heads.

Beside the Sea Trek program, there are others in which you can interact with dolphins.

For instance, there is the Dolphin Swing option where people can swim in an outdoor pool with the creatures. It’s also a great learning experience for the kids because the professional trainers explain the dolphin’s characteristics in detail.

And, of course, there is also a dolphin show in which four trainers and four large dolphins entertain the audience with a choreographed show. The performance takes place twice a day during the week and four times a day on the weekend.

A total of 20 dolphins are kept at Geoje Sea World. Although animal activists earlier opposed the import of dolphins to the facility, it’s hard to deny that such an activity is attractive to some.