A high price to pay for coffee at major chains

A high price to pay for coffee at major chains

Following the price increases at mega coffee chain Starbucks earlier this month, Coffee Bean Korea yesterday raised the prices of its most popular drinks by 100 won to 300 won.

The chain was criticized because it bumped up the prices without any notice to customers, unlike Starbucks Korea, which made its price rise public in advance. 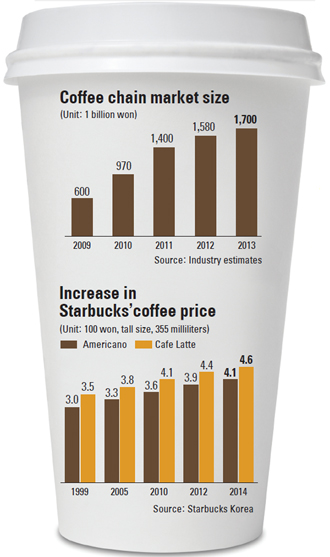 Both Starbucks and Coffee Bean cited the cost of rent and labor as the main reason for the increases.
“Due to rising rents, recently opened stores are located in a corner instead of on the main boulevards, and on the second floor instead of the first floor, but still the cost is burdensome,” said a spokesman for Coffee Bean Korea.
Labor costs have gone up along with the minimum wage. The minimum hourly wage for part-time workers rose 7.2 percent to 5,210 won from last year and will increase 7.1 percent to 5,580 won next year.

However, unlike most other coffee chains, Starbucks and Coffee Bean hire salaried full-time workers almost exclusively, so it is not clear how a higher minimum wage would add much to their labor costs.

“When minimum hourly wage is increased, we also raise wages of regular full-time workers,” said a spokesman for Starbucks Korea.

“As most shops are open past midnight, expenses for overtime and the transportation allowance also increase,” said a Coffee Bean Korea spokesman. 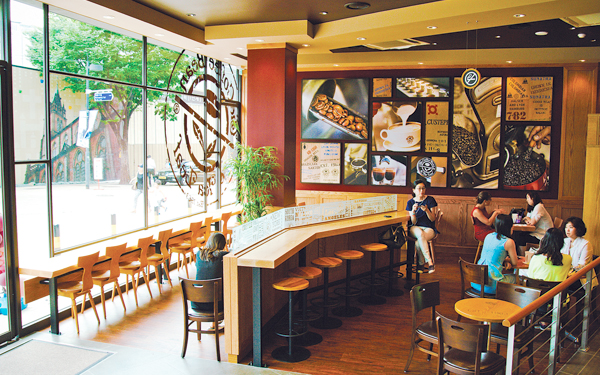 However, in 2012, Coffee Bean’s labor expenses, including salaries, retirement and employee benefits, accounted for 22.8 percent of sales and decreased to 22.3 percent in 2013.

But one real estate agent said statistics by the ministry do not necessarily reflect the rent paid by coffee shops that are concentrated in expensive commercial districts.
“When Coffee Bean and Starbucks open stores in less expensive neighborhoods and help revive the areas, sometimes building owners raise the rent,” said a coffee shop owner. “Rent and labor costs account for about half of the price of a cup of coffee.”

Coffee chains Caffe Bene, Twosome Place, Ediya Coffee and Paul Basset said they have no plans to increase their prices.