Samsung gets moving on Smart Home

Samsung gets moving on Smart Home 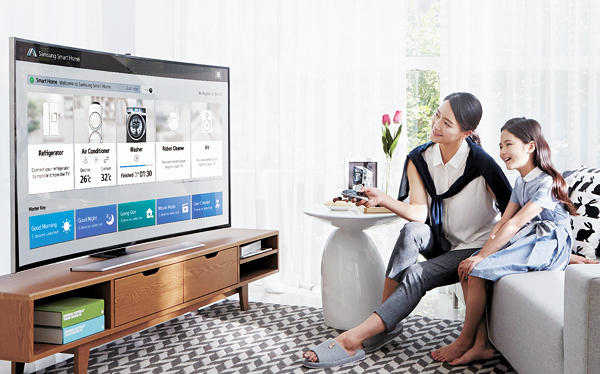 Sitting on sofa in his living room on a Saturday afternoon, Park Jin-soo, a 36-year-old office worker, watches European football league matches on TV. A machine is washing his clothes in washing room, but Park doesn’t need to get up to check on it.

All the information regarding the washing machine appears on the TV screen. An app installed on the television also tells him the temperature in the living room.

Samsung Electronics has been actively trying to further strengthen its Smart Home service.

According to Forbes on Tuesday, Samsung is negotiating to take over SmartThings, a Smart Home service developer in the United States, for $300 million.

Samsung also participates in a consortium led by Intel to develop standards and certification for devices used in the Internet of Things. Another consortium called Thread Group includes Samsung, Google and British technology company ARM, and aims to develop a new wireless networking protocol for the IoT.

SmartThings was founded by Alex Hawkinson, one of the world’s top experts on IoT, and has technology that helps connect devices.

That is deemed useful for Samsung, which is trying to concentrate its Smart Home services on two devices: smartphones and TVs.

For example, a user can whisper “Sleep Mode” into a TV remote control or a smartphone from outside to turn off power to all Smart Home devices.

Samsung also is enabling things through its self-developed Smart View 2.0 app, which exchanges video content freely among different devices. It is similar to Google Chromecast, which renders the screens of smartphones and tablet PCs on televisions.

Samsung enables the other way around as well, with the screen of TV rendered on that of smartphone or tablet PC.

“Set top box-like devices such as Chromecast and Apple TV are changing the landscape of the TV industry,” said an official of an ICT company in Korea. “Samsung is traditionally a powerhouse in the TV industry and it can do better than other companies with technologies of sharing and exchanging content between mobile devices and televisions.”

Given the quickly maturing smartphone market, the moves by Samsung, Google and Apple are apparently aimed at securing a new source of revenue. According to Cisco Systems, the global IoT market will grow to $19 trillion annually in a decade. “We are almost the only company in the world that produces every type of electronic device, from smartphones to TVs and air-conditioners,” said an official of Samsung Electronics, “So we will try to play more of a leading role in the Smart Home market.”