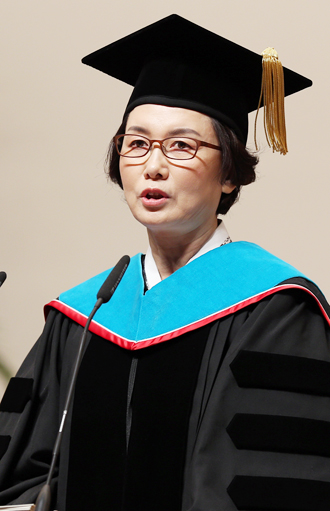 The new president of Ewha Womans University, Choi Kyung-hee, sounds determined to make her vision a reality: turning the all-women’s university into one of the world’s leading academic institutions through continuous innovation.

“It is time for us to draw a big picture that looks into the next 100 years by collecting the wisdom of every Ewha alumnae,” Choi said in her inauguration address at a ceremony on Wednesday.

“I will offer challenges and innovation to become the world’s best as my vision, and raise the value of ‘Innovation Ewha’ that will not only open a new era but look into the 200-year future of our school.”

She has been teaching college students since 1994 at her alma mater. Choi also served as the presidential secretary for education and culture and as chairwoman of the Korean Society for Environmental Education.

“Instead of competing over the shallow college evaluation ranking,” she said in her address, “it is the time to step up competition on college’s sole role by improving practical research and stepping up education,” the new president said.

Choi wants to set up a “smart campus” with new infrastructure and a network to provide scholarships for students who later emerge as global leaders.