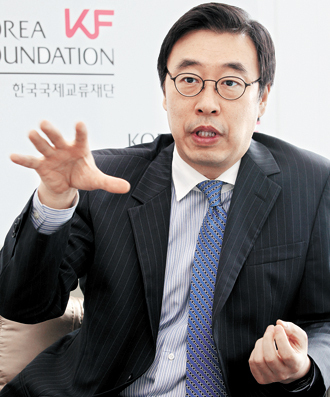 Yu Hyun-seok, president of the Korea Foundation, deplores the reality of Korean public diplomacy, citing the government’s lack of recognition in the importance of and investment in U.S. think tanks that have growing significance.

“Washington is becoming a battlefield of public diplomacy,” he said in a recent interview at the foundation’s headquarters in central Seoul. “In the United States, there are frequent exchanges of human resources between the government and think tanks. Government officials are sent to a think tank once an administration ends and return to the government when the administration changes again.”

That means managing think tanks well under the government’s leadership is an investment that can produce visible and direct results, according to the president, who also works as a political science and international relations professor at Kyung Hee University in Seoul.

If former U.S. Secretary of State Hillary Clinton wins the 2016 presidential election, Yu predicts many researchers from the Brookings Institution, a Washington-based nonprofit devoted to research and policy solutions, will be dispatched to major government posts, including the U.S. Department of State.

Japan has already realized the importance of U.S. think tanks and the government, and public foundations and enterprises are waging a fierce diplomacy battle to ally with Washington-based think tanks, Yu said.

On the other hand, the Korea Foundation is effectively the only organization that is managing its network with Washington with a scant budget, which means it is hugely limited.

This year, Japan launched a public policy department under the Ministry of Foreign Affairs fully devoted to investing in U.S. think tanks.

The Sasakawa Peace Foundation in May scouted Dennis C. Blair, the former U.S. director of National Intelligence, as its president and is spending its immense budget to host and sponsor various Japan-related seminars and conferences.

The foundation was established by Ryoichi Sasakawa, an Osaka-born businessman and politician, in September 1986.

Major enterprises such as Toyota and Hitachi have also sponsored seminars hosted by U.S. think tanks with the long-term goal of promoting national interests.

By comparison, the Korea Foundation, the sole government institution that builds relationships with U.S. think tanks, earmarks around $1 million, assumed to be around one-100th the combined amount for similar foundations in Japan.

“When the image of Japan in the international arena deteriorated last year after Japanese Prime Minister Shinzo Abe visited the Yasukuni Shrine, the Japanese government as well as the private sector poured in human resources and funds [as damage control],” Yu said. “The United States increasingly expressing concerns about Korea and China having tightening ties was the result of Japan’s active influence paddling.”

The Korea Foundation in May last year joined forces with Korea’s SK Group to install a Korean chair at the Brookings Institute, a measure that follows the same action with the Center for Strategic and International Studies in 2009.

“Our situation is a toddler when compared to Japan’s,” he said. “Korea’s global companies are hoped to realize that investment in U.S. think tanks will not only promote national status, but help their corporate activities in the United States and to step out to provide support.”