Moon’s position boosted after the polls

Moon’s position boosted after the polls 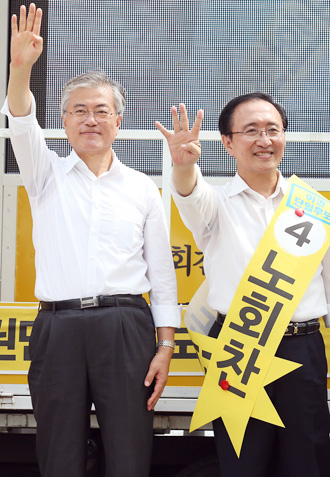 Moon Jae-in, left, roots on July 28 for Roh Hoe-chan, a candidate for the by-elections from the tiny Justice Party, in Dongjak B District in Seoul. [NEWS1]

With the main opposition New Politics Alliance for Democracy reeling from stunning defeats in Wednesday’s by-elections, former presidential candidate Moon Jae-in has emerged as a potential front-runner to lead the party, with a bolstered promise for a second presidential bid.

Such a comeback would provide a needed boost to his political stature nearly two years after he was tapped by the opposition to run in the 2012 general election.

Moon’s expected rise follows Ahn Cheol-soo’s resignation from the NPAD’s top position, in which he took responsibility for the party’s humiliating loss in the polls.

With Ahn’s exit, it is likely that those in the party who were considered pro-Ahn members will not be able to maintain their political influence.

It is also expected that they will have a difficult time snapping up supreme council positions at its next party convention.

The election outcomes, in which the ruling Saenuri Party won 11 of 15 contested seats, also greatly diminished Ahn’s chance for a presidential bid, and many political observers have argued that he may never recover the political popularity and fanfare he once enjoyed.

The expectation that Moon would vie for a second presidential bid was reflected in an opinion poll of 2,500 adults nationwide conducted by the public opinion researcher Realmeter from July 21 to 25.

In the survey, Moon topped the list with 15.5 percent, followed by Seoul Mayor Park Won-soon with 15.2 percent. Saenuri Chairman Kim Moo-sung, whose leadership within the ruling party was further cemented thanks to the landslide victory in Wednesday’s polls, came in third with 13.4 percent. The margin of error was plus or minus two percentage points.

The fact that former TV journalist Park Kwang-on won a district race in Suwon, the only victory the NPAD secured in the six races across the capital region, is also expected to work in Moon’s favor, particularly in his efforts to maintain a firm grip on the main opposition.

The former human rights lawyer wielded his share of influence on the main opposition’s campaign trail in Suwon and Seoul, drawing large crowds.

But while much attention has been focused on what role Moon will play in reshaping the power balance in the NPAD, some observers predict a bumpy road ahead should he choose to go for the party chairmanship.

“I don’t think Moon will be elected to take charge of the party because of the factional discord between the lawmakers who are pro-Roh Moo-hyun and other members,” said Cho Kwang-hwan, the head of the political consulting firm Makers 10. “Their sense of mistrust runs very deep.”

Meanwhile, the NPAD said yesterday that the party will hold its convention sometime between January and March next year to elect its new leadership, which includes the chairmanship now vacated by Ahn and his partner Kim Han-gill.

Until the convention, the major opposition, currently with 130 lawmakers, will be led by an emergency committee chaired by Acting Chairwoman Park Young-sun, who is also the party’s floor leader.