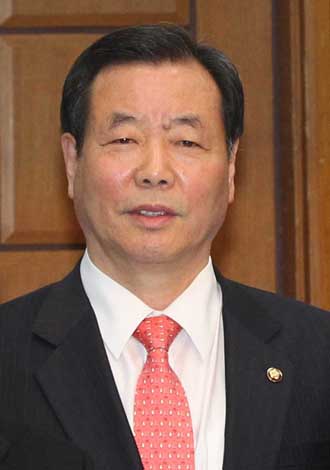 A ruling party lawmaker has been accused of accepting bribes from a railway business company in return for exerting his influence on government-run projects, prosecutors said yesterday.

Representative Cho Hyun-yong of the Saenuri Party is to be questioned about alleged bribery by Sampyo E&C, a railway track manufacturing company and component supplier, in return for exerting his influence on contracts for the company.

Prosecutors believe that when Cho was chairman of the board of the Korea Rail Network Authority from 2008 to 2011, he received money from the company via his chauffeur and a friend.

The state-run corporation is overall in charge of Korea’s rail network and manages the railroads in the country, according to its website.

Since his chauffeur and a friend were arrested by the prosecution on Thursday, Cho has turned off his cell phone and cut off communication with the outside world, prosecutors said. He did not show up at a meeting of Saenuri legislators yesterday at the National Assembly. The prosecution said they would soon add him to a list of persons banned from leaving the country.

According to the prosecution, Cho continued to receive bribes from the company after he stepped down as chairman of the authority in August 2011.

Seven months after his resignation, he was nominated as a Saenuri Party candidate for the legislative elections in June 2012, and won a seat from South Gyeongsang.

Prosecutors said Cho could have spent funds from the alleged bribes on his campaign or in lobbying the Saenuri Party leadership to win the nomination. Although only speculation at the moment, such a development could widen the scope of the investigation dramatically.

From 2012 until recently, Cho was a member of the National Assembly’s Land, Infrastructure and Transport Committee, a powerful body in charge of reviewing the budget and other funding for state-run organizations handling construction projects.

“A lawmaker [who is a member of the committee] can wield his power in choosing a company [for contracts],” an official from a railway business company said. “We can’t avoid lobbying because our fate depends on whether we can win a bid for a multimillion-dollar project.”

The prosecution said it has a list of other lawmakers who are former and current members of the committee, implying that bribery might be more widespread than just the current case.

But a prosecution official was cautious about that, saying, “So far, we are not investigating other lawmakers. We are focusing only on Cho.”