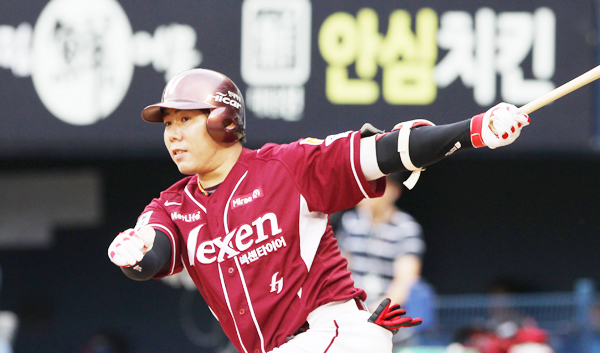 Kang Jung-ho at a game against the LG Twins Saturday.By Yang Kwang-sam

In what is perhaps his last year in the Korea Baseball Organization, Kang Jung-ho of the Nexen Heroes has become the first shortstop to hit 30 home runs in a season since 1997.

Kang’s goal is to become a full-time short stop in Major League Baseball next year.

In a match on Saturday against the LG Twins at Jamsil Stadium, Kang blasted a two-run homer against Twins starting pitcher Cory Riordan in the top of the first inning.

It was the shortstop’s 30th homer of the season and his personal best since achieving 25 in 2012.

The achievement gave Kang the record of being the first league shortstop to hit 30 home runs since Lee Jong-bum of the Haitai Tigers gained the same number in 1997.

Every time Kang hits a home run for the remainder of the season he will make a new KBO record. Kang has 37 more games to play this year and so it’s statistically possible he could hit 43 homers this season.

Kang could now aim for multiple hitting titles that might get him the Most Valuable Player award. The shortstop is currently second in terms of home runs, chasing Park Byung-ho, who hit 33 as of yesterday. He is also second in the league in RBIs with 85 and is also leading in the slugging percentage category at .723.

If Kang stays on a roll for the rest of the season, winning the MVP won’t be just a dream for him because he plays shortstop, a position usually taken by good fielders. His league-leading 6.74 wins above replacement (WAR), an index showing a player’s total contributions to his team, also makes clear that he has influenced his team’s wins more than any other player in the league.

Having a shortstop with gold-glove level fielding who can bring more than 30 home runs and about 100 RBIs is a gift not many baseball managers can enjoy.

The 183-centimeter-tall and 96-kilogram (6 feet, 211 lbs) player is considered a different type of shortstop by MLB scouts.

“Looking back, the Japanese shortstops who challenged the MLB were kind of skinny and fast and were obviously a lot better in fielding than hitting,” a MLB scout said on condition of anonymity.

“But this 27-year-old who has a good fielding ability in the toughest position in baseball has also hit more than 20 home runs for three consecutive seasons. It is something worthy to watch for MLB teams.”