Late last month, about a thousand group executives gathered over two days from July 26 to 27 at the Samsung Electronics business division in Suwon, Gyeonggi.

Those present included employees from the legal, human resources, finance and PR departments, as well as workers from the consumer electronics sector and IT & Mobile division.

They gathered for a sort of breakthrough workshop, an emergency meeting in which each of its business units tackled how to address rising concerns within Korea’s largest conglomerate after profits from its flagship products, smartphones, nosedived in the second quarter. The situation is a challenge the group has rarely confronted.

At the workshop, the issues discussed varied, from poor communication among core business sectors, to errors in setting strategies, to the failures to predict and analyze a sluggish market that has been covered up by positive earnings. They also discussed an exceptional restructuring plan that would combine the Consumer Electronics and IT & Mobile units.

Executives from Samsung’s wireless business unit have already taken responsibility for sluggish smartphone sales, returning 25 percent of incentives for the first half and deciding to cut overseas business trip expenses by 20 percent.

They also plan to deploy about 150 to 200 employees on management support teams from Samsung headquarters in Seocho-dong, southern Seoul, and divisions in Suwon, Gyeonggi, to the business departments of each unit, including the mobile, home electronics and semiconductor units.

But while on the outside it seems like sluggish sales of the Galaxy S5 contributed to the rapid drop in smartphone sales, more fundamental problems exist beneath the surface.

The “fast follower” strategy that Samsung has pushed for the past 20 years in its leap toward becoming a global IT leader is tottering as a whole.Samsung completely beat out Japanese electronics companies such as Sony in the 2000s and eventually caught up with world powerhouse Apple, but now the group finds itself being chased by Chinese companies that have copied Samsung’s growth strategy.

While Apple is dominating the high-end market, the mid- to low-end market is being threatened by Chinese enterprises. Making matters more complicated, Samsung Chairman Lee Kun-hee, who has long acted as a guide during times of crisis, has been hospitalized since May.

And now its relations with Google, thought to be the group’s permanent ally, are showing signs of falling out, as Samsung started developing its own operating system (OS) with Intel, Panasonic and other mobile carriers.

Samsung used the Tizen OS in its Samsung Gear 2 for the first time and recently released the Tizen smartphone Samsung Z.

Google apparently wasn’t pleased with Samsung’s decision to break away from Android, and excluded Samsung from its list of partner companies, particularly on its health care platform, in which the American tech giant has been working to come up with innovative digital health solution. The platform has continued to draw attention as a growing new market.

“After Samsung balked with the Galaxy S5, it doesn’t seem to know which direction to take,” said one industry official.

But for now, the company is looking for a breakthrough with the restructuring of its businesses. In this regard, Samsung Electronics is looking to condense its business units related to finished products, which are divided into three sectors: smartphones, televisions and home electronics.

Such a move is intended to ensure that Samsung would not fall behind the Internet of Things - a term that refers to the wide interconnection of devices, services and other machines - which has slowly emerged as a large and promising market. 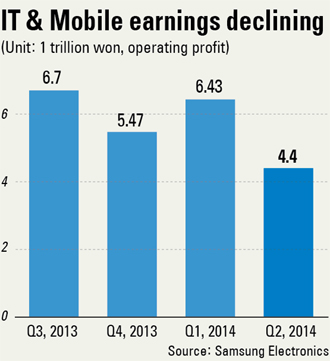 “Smartphones have become just a part of the large Internet of Things market,” said an executive at Samsung Electronics.

“Plus it has been consistently pointed out that the partitions between business units block synergy.”

The group also plans to raise the competitiveness of its non-memory system semiconductor, which has been relatively lagging.

It will implement its own non-memory smartphone processor Exynos in the Galaxy Alpha, which will be launched next month at around 500,000 won ($483) and in a phablet, the Note 4, scheduled to be released in September.

A phablet, a portmanteau of the words phone and tablet, is a device that is meant to combine the use of the two products.

However, it is still difficult to guarantee whether the Internet of Things and smart home businesses will become hit products for Samsung like its smartphones, of which 300 million units are sold a year.

“Samsung employees have the capabilities to overcome crisis, as they have overcome numerous challenges and difficulties,” said a Samsung spokesman. “In the third quarter, marketing expenses and the inventories will reduce significantly and the sales of flagship products such as smartphones will rebound.”

However, market analysts agree that Samsung will not likely recover in the third quarter due to increased competition in emerging markets, including China, with local manufacturers for mid- to low-end smartphones.

“It was not expected that Samsung would change its optimistic forecast for the third quarter to pessimistic in just three months in its third quarter guidance,” said Lee Seung-woo, an analyst at IBK Investment and Securities. “It shows how uncertain the current IT industry is.”