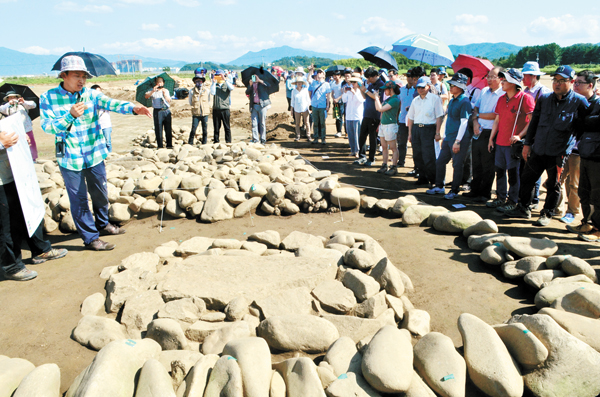 From left: Archaeologists explain the history of the Bronze Age dolmens found on Jung Island in Chuncheon, Gangwon; The relics found included rare prehistoric artifacts such as a patterned copper sword and a fan-shaped bronze ax; The finding occurred at the place where Legoland was supposed to be constructed by 2017. [NEWSIS]

It’s exciting news for Korean scholars. The 1,400 relics from the Bronze Age, including 100 dolmens (stone tombs), 900 housing sites, a ditch, a copper sword and a bronze ax, could tell so much about the lives of people who lived on the peninsula thousands of years ago.

The only downside is that the site is where a massive theme park - Legoland - was supposed to be constructed, which the people of Gangwon had high hopes for. They believed it would place Chuncheon on the must-visit lists of tourists.

Since 2011, the Legoland project has been led by the Gangwon government and supported by the Park Geun-hye administration. As the name suggests, the park was supposed to be a large-scale entertainment facility with Lego blocks as its theme. One of the investors of the 500 billion won ($488 million) project is the U.K-based Merlin Entertainment Group.

However, with the latest finding, its unclear what the future of Legoland will be, particularly because the relics from the site are so rare and academically important. Some people say that Legoland should not be built and that there should be a “Dolmen Land,” or a place where people can experience prehistoric way of life instead.

Life and death together

“It is an important historic site in that relics concerning everyday life, production, and after-death have been found all in one site,” said Sim Jeong-bo, the head of the Committee on Cultural Heritage in charge of buried cultural properties of the Cultural Heritage Administration (CHA), one of the five institutions that took part in the archaeological investigation, which began in October last year.

Archaeologists found signs of a village on Jung Island, including a ditch that functions as the boundary of the settlement, sites for houses of various sizes and dolmens. At the two housing sites, archaeologists found a patterned copper sword and a fan-shaped bronze ax. They say about 30 patterned copper swords were found in Korea, but the rest were all discovered in tombs. There are also about five fan-shaped bronze axes, with the recently unearthed one being the most well-preserved.

“It’s amazing how a variety of artifacts from the early- to mid-Bronze Age are scattered around in this area,” said Oh Seung-hwan, the director of Hangang Institute of Cultural Heritage. Scholars believe this village was first formed between the 14th and 12th century B.C.

While the finding may be amazing, insiders say it was widely expected that there would be an important historic site in the region. With rich soil formed by the Soyang and Bukhan River, the area has been favored by farmers since ancient times.

Signs of prehistoric life had already been detected in the 1960s. And in the 1980s, an archaeological exploration initiated by the National Museum of Korea found about 270 sites for dolmens and houses, proving that the entire island is a treasure trove.

So what will happen to Legoland now? Officials are saying that they will go ahead with building it and that their plans to break ground within the year are unchanged. However, they indicated an interest in preserving the site by building a separate history museum, whose feasibility some people have doubts about.

Legoland and Korea haven’t had a smooth ride. A plan for Legoland first emerged in 1999. Back then, it was supposed to be built in Gwacheon, Gyeonggi, but the plan didn’t work due to the government’s development restriction regulations.