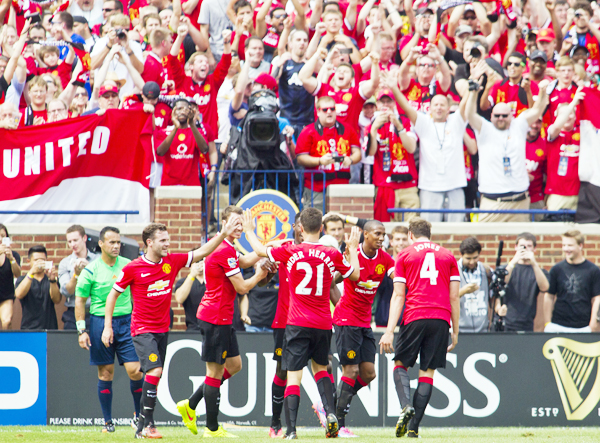 Manchester United midfielder Ashley Young, second from right, celebrates his goal against Real Madrid with teammates in the first half of a Guinness International Champions Cup at Michigan Stadium, Saturday. [AP/NEWSIS]

Ashley Young scored twice in the first half, and Manchester United defeated Real Madrid 3-1 on Saturday in front of the largest crowd to watch a football game in the United States.

United remained unbeaten in this year’s International Champions Cup, advancing to the final of the preseason tournament under new manager Louis van Gaal. Javier Hernandez added a goal in the second half for United.

Gareth Bale scored for Real Madrid, but the European champions finished winless in three matches at this event.

Reigning world player of the year Cristiano Ronaldo, who has been recovering from the left leg injury that limited him in the World Cup, came on surprisingly as a 74th-minute substitute, although he didn’t have much impact.

“His condition is improving,’’ manager Carlo Ancelotti said. ``I think that he needs another week to train with the teammates, and then I think he will be ready for the first game of the season.’’

United remained unbeaten this year in the International Champions Cup, advancing to the final of the preseason tournament under new manager Louis van Gaal. Javier Hernandez added a goal in the second half for United.

Gareth Bale scored for Real Madrid, but the European champions finished winless in three matches in the event.

Although United will play in Monday night’s final in Miami, this was probably the tournament’s marquee match, with two of the game’s most storied clubs playing at one of the largest and most iconic venues in the U.S.

“That was incredible,’’ United’s Michael Keane said. “Obviously, it is the biggest crowd I’ve ever played in front of, and it is for a friendly in the States. I’ve always heard they don’t care for our football, but there were 109,000 people out there. That’s pretty crazy anywhere in the world.’’

Young’s first goal was the highlight. Wayne Rooney flicked a clever back-heel to Darren Fletcher, who found Danny Welbeck in the middle, near the edge of the penalty area. Welbeck played Young in on the left, and his low shot beat goalkeeper Iker Casillas.

“It was a fantastic goal,’’ van Gaal said. “All the team has touched the ball, I think. Only for that goal, you come to the stadium.’’

Bale equalized in the 27th minute, converting a penalty kick after being pulled down by Keane.

Young put United back ahead in the 37th minute, playing a long cross in from the left. Casillas had to maintain his position near the middle of the net because Rooney was a threat to head the ball - but instead it sailed past the star striker and bounced in at the far post.

Hernandez made it 3-1 in the 80th minute, heading past Casillas from close range off a fine cross from Shinji Kagawa.

United is hoping to bounce back from a seventh-place finish in England last season - the team did not even qualify for the second-tier Europa League. Van Gaal is taking over after leading the Netherlands to the semifinals of the World Cup.

“It’s a new system, and we’re getting used to it, but we’re happy with what we’ve done so far,’’ Young said. “Obviously, it is a great feeling to score two goals, but those were both set up by my teammates. The first one was a beautiful team move.’’