Nature has been a muse for artists past and present in the East and West.

At the National Museum of Korea in Yongsan District, central Seoul, a landscape painting that spreads across eight and a half meters (28 feet) offers a spectacular sight.

Titled “Mountains and Rivers Without End,” this 18th-century masterpiece by Yi In-mun (1745-1824) depicts an ideal world with a chain of overwhelmingly picturesque mountains, mysterious people and buildings scattered here and there.

The piece is one of the 109 landscape paintings of Korea, China and Japan created between the seventh century and the 1980s that are on display at the ongoing “Landscapes: Seeking the Ideal Land.”

“Mountains and Rivers Without End” particularly stands out, however, and is enough to warrant a visit to the museum by itself.

However, the work of the two differs greatly.

There is a wide variety of interpretations of the painting. Some scholars say, given that Yi’s pen name was Old Pine Tree and Flowing Waters, the painting could be considered a self-portrait in a way.

However, Oh Ju-seok (1956-2005), an art historian, said because the land and the people are the subject of a king’s rule, the message could be “Long Live the [Joseon] Kingdom.” 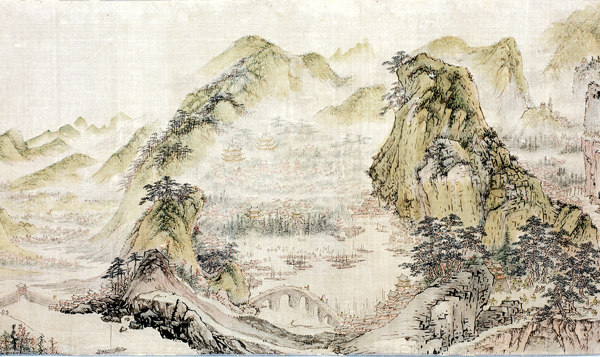 “Mountains and Rivers Without End” depicts what Yi believes is an ideal world. Provided by the National Museum of Korea

Besides “Mountains and Rivers Without End,” there are other landscape paintings that have a cooling effect no air-conditioner could give.

Kim Hong-do’s 19th-century “Being in Nature is Better than Holding Official Ranks” depicts the idyllic life that scholars of the time dreamed of, while “Paradise” by female painter Baek Nam-soon (1904-94) is drawn on a traditional Asian folding screen but displays clear influence from the Western-style drawings of paradise, which were popular during the 19th century.

Landscape paintings from China and Japan are featured as well.

A 14th- to 15th-century painting “Ode on Returning Home” came from the Metropolitan Museum of Art in the United States.

Although its artist is unknown, it is one of the most highly appreciated paintings, which is inspired by the “returning home to the country” theme of famous Chinese poet Tao Yuanming (365-427).

“We hope people today will get a chance to examine what ideal life and society is to them, as they enjoy these beautiful paintings that show the ideal world in the eyes of ancient people,” said Kwon Hye-eun, a curator with the art division of the museum.