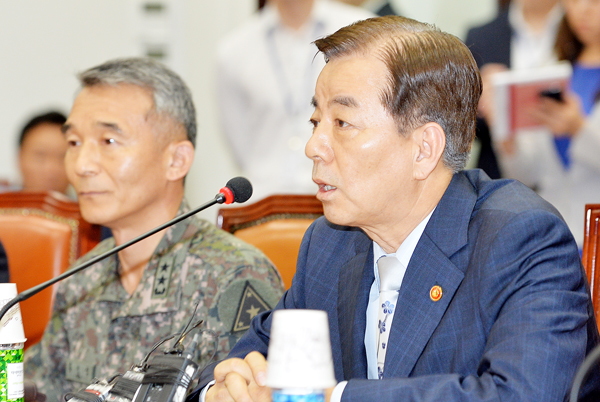 At a Saenuri Party Supreme Council meeting, Defense Minister Han Min-koo, right, delivers a report yesterday on the horrific physical and mental abuse endured by 23-year-old Private Yun, which led to his death in April. [NEWS1]

The horrific physical and mental abuse of a 23-year-old Korean Army private that led to his sudden death in April has prompted a strong response from the ruling party, whose leadership called for an overhaul in military discipline.

In a meeting of its senior members yesterday, the Saenuri Party urged that the scope of punishment be expanded for the assailants in the case involving the death of a conscript of the Army’s 28th Division, identified only by his surname Yun, and that the tragedy be used to serve as a warning to others.

At the meeting, Saenuri Chairman Kim Moo-sung summoned Minister of National Defense Han Min-koo to issue a detailed report on the case to the party. It is rare for the ruling party to hold a leadership meeting over the weekend regarding a special agenda.

“From what we have uncovered so far, this is a murder case,” Chairman Kim said to Han. “How can such a thing happen? Does the minister not have kids? Why did [the ministry] try to keep it concealed?”

Kim slammed his fist on the table several times as he spoke to emphasize his points, while Han remained silent.

Private Yun began his military service last December and was placed as a medic in late February in the 28th Division in Yeoncheon, Gyeonggi, where he faced systemic mental and physical abuse at the hands of his superiors.

“For such a tremendous thing to happen in the barracks indicates that discipline in the entire Army has completely collapsed,” said Lee In-je, a six-term Saenuri lawmaker and a member of the Supreme Council.

When Defense Minister Han responded that he would “do his best to overhaul the military to eradicate such an atmosphere,” Lee cut him off by telling the defense minister to “stop with the textbook-like answers ... If there was a healthy form of discipline in the Army, such an incident would not have occurred.”

Between March and early April, Private Yun routinely faced sexual harassment, humiliation and full-body beatings by other soldiers, during which no one intervened. The unit’s 23-year-old commissioned staff sergeant, identified only as Yoo, also took part in the torture.

Yun’s tormenters reportedly once put an anti-inflammatory ointment on his genitals, which caused him extreme pain. Based on witness testimony, he was also forced to mimic a dog and lick his assailants’ spit from the floor. After a particularly horrendous beating by a group of soldiers, Yun collapsed on April 6 and did not awake again despite efforts to resuscitate him.

An assault in the barracks earlier that day had caused a piece of food to obstruct his airway, leading him to die of asphyxiation, according to medical records. Photographs of Yun’s body show his entire torso covered in purple and brown bruises.

Military prosecutors indicted six soldiers allegedly involved in the assaults, including a sergeant surnamed Lee, 27, for involuntary manslaughter. A military tribunal is handling the case. According to the Center for Military Human Rights, a non-governmental organization, Yun’s tormentors allegedly picked on him for his slow speech and actions, as well as for a limp that he developed from the perpetual torture.

“A case of death from assault in the barracks is something that cannot occur in a civilized society in the 21st century,” Han said. “It is a disgraceful and regretful event.”

“The assailants and all others involved in the case must be punished to serve as a warning to others so that such an incident does not ever occur again,” he added.