After tragedy, Jindo works to pick up the pieces

After tragedy, Jindo works to pick up the pieces 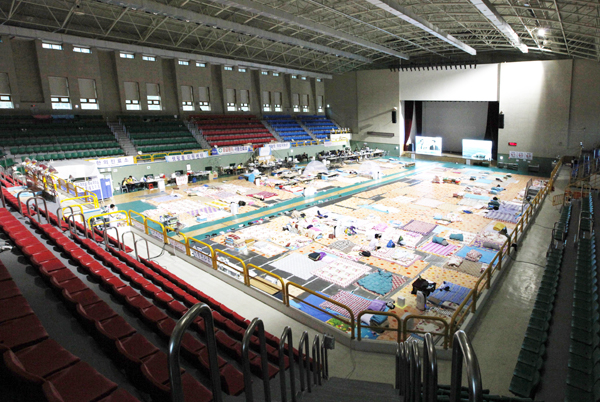 The Jindo Gymnasium, once filled with the restive and grieving relatives of victims of the Sewol ferry, now stands largely empty. Only about 30 relatives of the 10 missing passengers continue to camp out at the gymnasium. The photo was taken July 24. By Park Sang-moon

JINDO - “One pair of jeans, one pair of tennis shoes, three towels, one bottle of seasickness pills, one sunscreen …” counts a Coast Guard officer aloud as he unpacks a small suitcase. A colleague stands next to him, jotting down the items.

There are four such suitcases laid on the ground at Paengmok Harbor in Jindo County, South Jeolla. The suitcases belong to 11th graders from Danwon High School, many of whom perished in the sinking of the ferry Sewol. Of 325 Danwon students aboard the Sewol on the morning of April 16, only 75 escaped.

“Divers bring the suitcases from the Sewol ashore,” says the officer. “These were brought yesterday and today.” Many of the suitcases were packed by the 304 passengers or crew who did not survive the sinking off Jindo Island.

The officer opens another suitcase and starts unloading its contents. It includes a smartphone battery charger, earphones, pairs of socks and underwear that a girl prepared for a four-day school trip to Jeju Island.

“We take photos of these items and show them to the parents,” the officer says. “And most of the time, they know whether they belonged to their children right away.”

Three months after the sinking, 10 people are still missing - five Danwon students, two teachers and three other passengers. The recovery mission continues, and every day a diving team comprising of the Coast Guard, military and civilians scours cabins in the overturned ferry. Seventeen days have passed as of today since the last remains were found on July 18, a female crew member who was a cook.

But suitcases have become the main items brought ashore, offering the last traces of the Sewol’s victims.

“Please do not photograph these items,” the officer says. “They are too personal.”

A few weeks ago, Paengmok Harbor, the point where remains from the wreck were brought ashore, was filled with grieving parents and reporters. It’s much quieter now. Less than a dozen reporters are still on the story. Cries of stricken relatives are not heard anymore. The smell of the ocean and the sound of sea waves crashing fill the quiet port.

But volunteers are still coming to Jindo to pay their respects and lend a hand. At the harbor, a woman bows deeply with her head touching the ground before the victims’ nameplates, praying for an easy passage into eternity for the deceased, a Buddhist practice.

“I came here on May 14 hoping to offer some help to the relatives,” said Yoo Ae-jung, a 59-year-old homemaker from Masan, South Gyeongsang. “Now I just hope the relatives of the 10 people still missing can find peace by finding their loved ones.”

She brushes away a tear.

A long line of yellow ribbons can still be seen tied on a fence facing the sea. Yellow ribbons usually signify the hope of a loved one’s return. But in the context of the Sewol tragedy, they signify the hope of parents and other relatives that the remains of their loved ones will be brought to land. The ribbons are now faded and marked with stains.

“You can do this,” reads one worn ribbon. “You have to see me and your mom before you go.”

The Jindo Gymnasium, which was filled with agonized parents and their heartbreaking cries in the first few days of the accident, has largely emptied out - but not entirely. It’s still home to about 30 relatives of the 10 missing passengers.

Visitors are allowed to view the gym from the second floor. They are not allowed to mingle with parents.

Volunteers actually outnumber the remaining relatives in the gym. Two large television screens set up after President Park Geun-hye’s visit to the encampment a day after the sinking are still working. One is a direct feed from the recovery efforts in the waters off the coast. Another shows cable news shows, including live coverage on the finding of the badly decomposed body of Yoo Byung-eun, the patriarch of the family that owned and operated the ferry.

Joung Soung-ju, a local Jindo resident, is one of the volunteers at the gym.

Joung has gotten a lot of media attention since her husband, a painter, offered to paint portraits of the lost students and teachers for free.

“He has painted about 30 portraits of Danwon students and teachers for the families,” says Joung as she holds a portrait of Choi Hae-jung, a Danwon teacher whose body was retrieved three days after the tragedy.

“Parents give a big smile when they see portraits of their children. Some say it was the first smile they’ve enjoyed since the sinking.”

As divers continue to comb the sunken wreck to find the final 10 victims, a direct toll has been taken on the local economy with the customary summer tourists nowhere to be seen now.

“I understand the agony of people who lost their children to the sea,” says Kim Joong-hyun, owner of the Beach Town seafood restaurant, which sits right in front of Paengmok Harbor. “I am also a parent. I know the worse thing in the world is to bury your child with your own hands. But we have to get back to normal life now.”

Kim allowed journalists to use his restaurant as a hangout or a place to write stories in the weeks after the tragedy. He never insisted they order anything. Kim says his electricity bill in April was 200,000 won ($193) more than usual because the journalists were charging their phones and computers.

It was a price he “was willing to pay,” he says. “I wanted to contribute to the rescue efforts in any way possible.”

But three months on, he’s worrying more about his own survival in the wake of the tragedy.

“I sympathize with the relatives, but the number of tourists visiting here is now zero. The local economy is in a mess. I am starting to wish the relatives could move on so we can get back on our feet again.

“People in Jindo wholeheartedly helped the relatives without any conditions,” he continues. “I think it’s about time we are helped.”

Aside from the collapse of the tourist trade, the fishing business has also been affected. The waters around the wreck of the Sewol are off limits to fishermen as the recovery operation continues. And consumers don’t want to eat any fish taken from the Jindo area.

“An area where the Sewol sank is a fish-rich zone,” says Kim Young-suh, a fisherman with 30 years of experience who participated in the government efforts to prevent remains from floating away from the Sewol site. “But we are banned from fishing there. The whole population of Jindo has been affected by unintended consequences of the Sewol.

“Our products are now shunned by consumers. There is nothing we can do now. The government must do something for us.”