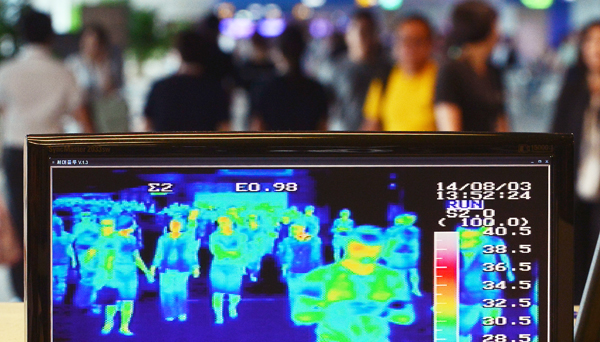 Passengers walk through a heat detector yesterday at Incheon International Airport. Worries over the rapidly spreading Ebola virus in West Africa and the growing number of travelers catching measles abroad have continued to grow in recent weeks. [NEWSIS]

Amid a horrifying outbreak of Ebola in West Africa, fear of the deadly virus has manifested in Seoul into outright opposition to an international conference, which women from affected or nearby nations were expected to attend.

Duksung Women’s University, host of the 2014 World Congress to be held in Seoul, came under fire yesterday after it was reported that participants from Nigeria, one of the affected nations, and 10 other African countries, were anticipated to take part in the event.

The World Congress of Global Partnership for Young Women 2014 centers on the empowerment of women. It will run from today through next Thursday in partnership with UN Women. A total of 500 people from 32 countries will be present.

In face of heavy criticism expressed by its students and the public over the potential spread of Ebola, the university announced yesterday that it had rescinded its invitation to the Nigerian participants.

However, it was not enough to cool down intensifying frustration from critics who demanded the entire congress to be called off. Some of the women’s university students and other opponents argue that other African participants from countries like Ghana or Rwanda may have come in contact with the disease.

The students yesterday initiated an online petition to cancel the event, garnering support from more than 15,000 people. Duksung’s official blog and website as well as a bulletin board on the Blue House’s website were bombarded with a flood of posts condemning the school’s hosting of the event.

The school said that it would try its best to prevent any potentially detrimental effects, reassuring the public that health officials would be on the lookout for anyone exhibiting Ebola symptoms, especially among the African participants. The school also said it would have participants stay in a separate building away from the school’s dormitory, reversing its initial plan to accommodate them in the dorms.

“It’s impossible to block the entrance of those from the non-affected countries,” said Heo In-seob, a public relations official with the university. “We are cooperating with the Ministry of Foreign Affairs and the Korea Centers for Disease Control and Prevention. I think that worries are too exaggerated.”

He added, “And since this is an international conference, it’s really hard to cancel the event at our discretion. Even if we could, it would have negative effects on the country as a whole.”

Worries over the conference started when a student uploaded a post on an online student community site affiliated with Duksung.

According to the World Health Organization, suspected, likely and confirmed Ebola cases in Guinea, Liberia and Sierra Leone now number more than 1,000 and have killed more than 600 people in the region so far.

The virus has a death rate of up to 90 percent, killing most of the people it infects.

Airports in Guinea, Liberia and Sierra Leone have taken preventive measures, according to officials in those countries. Neighboring countries such as Ghana have banned flights from those disease-stricken nations.

Last week, a medical missionary organization also faced a wave of criticism after it reported that it planned to visit Africa for volunteer work.

Following heightened concerns, the organization, which is affiliated with a mission, withdrew its plans.

About 70 nurses, doctors and volunteers from the group were scheduled to fly to those regions last Friday. “We decided to cancel all the schedules for volunteer service in the wake of the Ebola outbreak,” Good News Medical Volunteers said in a statement. “Every summer, we dispatch medical professionals in Africa and the Middle East. But this year, it seems that it would be hard to carry out medical service. We feel deep regret for what has happened in those West African countries.”