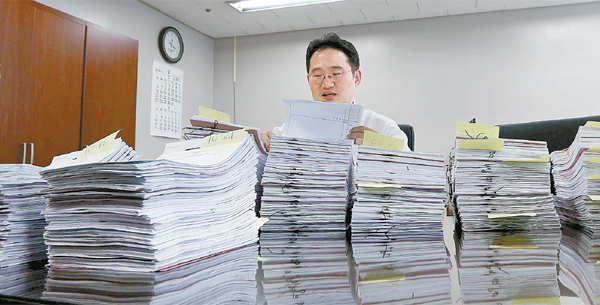 Park Dong-bok, a judge at the Seoul Central District Court in charge of small-claims cases, files documents connected with those civil suits. By Oh Jong-taek

At the annex of the Seoul Central District Court, a trial in a small-claims case was being held. A mother and her daughter attending the hearing looked upset.

When her mother stammered, the daughter stepped forward to say, “When we signed the contract, he told us that the commission was just half a percent. He lied to us.”

Their counterpart, a real estate broker in his 50s, got upset in turn, complaining, “What? You told me you would pay 0.9 percent.”

The altercation between the two sides continued. Park Dong-bok, a 37-year-old judge who has handled small-claims cases for a year and a half, began to work out a settlement.

“I should first arbitrate between you,” he said. “You said you were her daughter, right? But you are not the person who is officially involved in this case. So if you want to say something for your mother, you should have a written authority from the court first.”

Statistically, 70 percent of all lawsuits in Korea are small-claims cases. Most of them involve conflicts in the daily lives of ordinary people, such as disputes over unpaid phone bills or insurance compensation for traffic accidents.

On July 22, Park dealt with 180 small-claims cases, wrapping up a case every two minutes on average.

“If one case is delayed, people waiting their turn start to get bored,” he said.

Less than one in a thousand such cases make headlines. There are no celebrities and the amount of money involved is small. But if you closely watch the cases, you can sense the trend of current affairs in Korea.

Judges say they have found an increasing number of plaintiffs filing small-claims cases only because they were “so upset” at the defendants.

One man previously had won real estate lawsuits on ownership of lands worth millions of dollars, but he again filed a small-claims suit demanding compensation for emotional distress that he claims should be worth about 1 million won.

The case of two sisters on July 22 was also one of those “emotional small claims.”

A 44-year-old woman said she had a quarrel with her 35-year-old sister that developed into a physical scuffle. The younger sister filed a compensation lawsuit against her for a medical bill to treat a broken leg (2.1 million won) and for her mental suffering. The total compensation she demanded was about 10 million won.

At the hearing, the sisters blamed each other, citing alleged wrongdoings by the other in their childhood. Park brought them into his office for arbitration, but they failed to reach an agreement.

Some complainants have even brought their ex-lovers to court. A man asked his ex-girlfriend to pay back all of the money he had spent on their dates. Unlike in most small-claims cases, he even hired his own attorney.

“I want her to return a total of 19 million won, including the total amount of money I spent for dating her and the other money I lent to her,” he said. His ex-girlfriend predictably refused.

“The money for dating was spent for both of us, not just for me,” she said. “I also did not ‘borrow’ the money. He just gave it to me.”

Shim Chang-seop, a judge in charge of the dating suit, said he felt sorry for the couple. “They could have resolved the dispute by just saying ‘sorry’ to each other,” he said. “But they finally brought the issue to court.”

Many defendants were sued because they could not pay back small loans, make insurance payments, or pay their cell phone bills.

Judges sometimes hand down their rulings not by mail but by posting them to the website of the court, because they cannot find the addresses of plaintiffs or defendants. Roughly 1,000 case rulings are posted on the web every month, they say.

The defendants in those cases are mostly homeless people, judges said, whose houses were mortgaged to their lenders.

Many people in their 60s and 70s have been sued by telecommunications companies due to unpaid cell phone bills, judges said.

“Someone illegally bought a cell phone under my name,” a man, who was one of those, said. “I was charged 1.5 million won total in bills.”

A representative from the telecommunication company admitted that the defendant’s personal information had been stolen.

“You won the case, and you don’t have to pay the bill,” Park ruled. But the man still seemed to be anxious.

All the cases that Park had to handle that day were wrapped up at 6 p.m.

“Now I have to classify all of the documents and write verdicts,” he said. “I don’t think I can finish all of these until late tonight.”