Nakri weakens, but another looms

Nakri weakens, but another looms 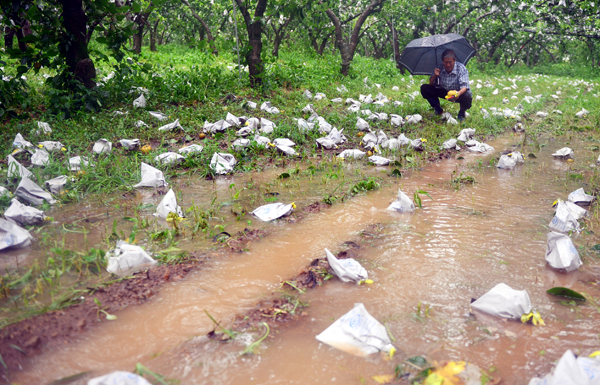 A farmer yesterday looks at pears scattered in an orchard in Boseong, South Jeolla, the result of Typhoon Nakri. [NEWSIS]

Typhoon Nakri dissipated yesterday, with the typhoon expected to move northward along the western coast of the Korean Peninsula, the Korea Meteorological Administration said. The weather agency said the typhoon passed through waters off Mokpo, South Jeolla, with maximum sustained winds of 22 meters (72.2 feet) per second.

However, Nakri turned into a tropical depression at around 3 p.m. as it encountered lower water temperatures on the western coast, which limited the typhoon from strengthening.

A tropical depression is categorized as a minor tropical cyclone with lower wind speeds. The system’s increasing vertical wind shear, the change of winds with height, also made it subside. Even if the typhoon weakens, the weather agency said, the public should be wary of subsequent rainfall associated with Nakri.

The Korea Meteorological Administration canceled typhoon alerts for all regions including the remote southern part of the West Sea and Heuksan and Hong Islands in the West Sea.

Still, Jeju Island, which has been hit hard by Nakri, came under a heavy rainfall advisory. As of 3 p.m. yesterday, Nakri had dropped accumulated rains of more than 1,500 millimeters (4.9 feet) on Jeju’s mountainous areas. But the impact of the typhoon was still felt across the country.

Seven people died yesterday in Cheongdo County, North Gyeongsang, after their car was swept away in swelling waters. Nakri also caused damage to a number of buildings, including Gwangju Kia Champions Field, a baseball park in Gwangju, South Jeolla. Roof paneling from the baseball stadium was swept away onto a nearby highway, though no further damage was reported. Additionally, more than 20 street lamps across country were either destroyed or partly mangled by the cyclone.

But while Nakri has gone, there have been no signs of relief. The Korea Meteorological Administration said that Typhoon Halong was also moving in a northwesterly direction yesterday after having hit Guam.

Halong is worrisome because it intensified over the weekend. Local media outlets reported that the typhoon has been categorized as a super typhoon, with maximum sustained winds of 250 kilometers per hour (155 miles per hour).

While its current expected trajectory puts the northern Ryukyu Islands and southern Japan at major risk with landfall and heavy downpours, the Korean Peninsula and parts of China were also cited as areas that could be potentially affected.

The state weather agency said that Halong is expected to hit Jeju and the southern coast on Friday or Saturday. The Central Disaster and Safety Countermeasures Headquarters warned people in the region to stay indoors.