Let the rich spend their reserves

Let the rich spend their reserves 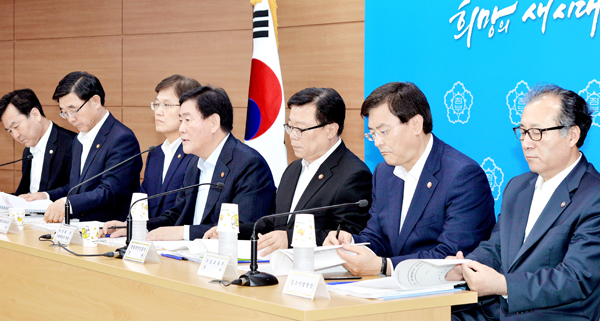 New Deputy Prime Minister for Economy Choi Kyung-hwan drew out an aggressive and strong economic stimulus package. It comprised of all immediately feasible actions. Some of them - taxing excess corporate cash hoards if they aren’t used to increase dividends, wages or reinvestment - are controversial and may have side effects. But Seoul’s stimulus policy is conservative when compared with the United States, Japan and the European Union, which had their central banks print out money to finance limitless liquidity easing. At least the government finally seems to sense the urgency of the economic state and is addressing the problem.

The government, however, missed one area. The goal of economic stimuli is designed to revive domestic demand by improving household income, and that cannot happen unless the rich join in. Private consumption reached 574 trillion won ($556 billion) last year, taking up about half of the gross domestic product worth 1,135 trillion won. Recovery in consumption is essential to economic growth.

Dull consumer appetite has received further setback following the worst-ever maritime calamity in April, when more than 300 lives were lost in the Sewol ferry disaster. Consumption in the second quarter edged down 0.3 percent from the previous three-month period. The consumer sentiment index in the second quarter was among the lowest by global scale. Both the middle and low income groups cannot afford to spend because they use whatever they have left from monthly income to pay off their debts. Wages have been stagnant for years and decently paying jobs are rare.

The breakthrough in the consumption bottleneck must come from the pockets of the wealthy. The rich can still afford to spend, regardless of the prolonged slowdown. The top 20 percent on the high-income bracket banked monthly black figures of 2.81 million won on average in the first quarter, compared with a monthly average of 1.93 million won in 2010. However, they do not spend enough. According to the national statistics office, income earners in the top 20 percent spent 59.5 percent of their available income while saving the rest. That share dropped from 65 percent in 2010.

So what has restrained spending by the richest? Some may not like to squander their wealth, and others may feel uncomfortable about going on a spending binge when the economy is so bad. The latter may be the more likely reason. They know they are resented and disliked by society, which is traditionally judgmental about extravagance.

That sentiment has turned bitter amid a lengthy slowdown and overall social pall in the wake of the Sewol crisis, which mostly claimed the lives of young students. Rich-bashing has also become a popular campaigning tactic. Politicians try to win favor with the broader low-income class by beating on the rich. The late liberal President Roh Moo-hyun drew the line between the top 20 percent and the rest.

Even the conservative party and its politicians have joined the bandwagon. The liberals have lost their appeal among the working class, and the rich have further isolated themselves, keeping their wallets shut.

Of all issued 50,000-won notes, only 28 percent is in circulation. The rich also take their money overseas, where they don’t have to look over their shoulders when spending. The amount spent by Koreans abroad last year reached $21.7 billion, although we can’t assume it came mostly from the rich.

In the same period, foreigners spent just $5 billion in Korea.

The stigma on the wealthy should be lifted. Someone has got to spend to create jobs and increase income. For now, the rich are the only ones who can help revitalize the economy.

According to a study by the Hyundai Economic Research Institute, if the top 20 percent in the high-income bracket spent 260,000 won more a month, 160,000 new jobs could be created and more than 7 trillion won could be added to the GDP for a full year. The government must come up with a plan to encourage spending by the wealthy classes.

The rich must also be happy to spend. The best way is to liberalize the services sector. Better and diverse choices in medical, educational, legal and financial services and tourism would be most appealing to the rich. The rich from China and other countries also seek high-quality services in Korea. These measures do not need approval from the legislature. If the ban on government employees’ playing golf is lifted, the lives of caddies and restaurant owners near golf clubs would become better.

Korean society has become complicated and divided among capitalists, populists and socialists after several economic challenges and amid a fierce election contest between conservative and liberal lawmakers. The new economic team must provide a more clear-cut path for society. It somehow must find a balanced and mix policy to bolster incomes for the working class and encourage spending by the wealthy.

*The author is the deputy editor in chief for the JoongAng Ilbo.