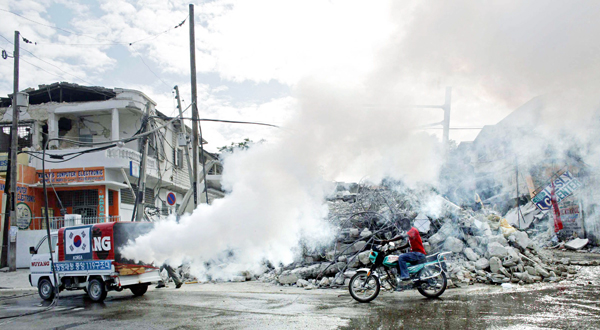 Korea’s truck fumigates to prevent mosquitoes near the presidential palace in Port-au-Prince, Haiti, in 2010.

NEW YORK - During a recent visit to the rural community of Los Palmas, Haiti, I had the opportunity to talk with families directly affected by the cholera epidemic that has been afflicting the country since the 2010 earthquake. One man explained that not only had the disease killed his sister, but his mother-in-law had also perished as she undertook the hours-long walk to the nearest hospital. He and his wife are now caring for five orphaned nieces and nephews.

In Haiti today, stories like this are not uncommon. Indeed, thousands of people across the country have endured similar trials and tragedies.

But there are also signs of hope. Increased community engagement and changes in hygiene practices have freed the women, men and children of Los Palmas and the neighboring village of Jacob of cholera - a dramatic reversal from the last few years - and reduced their risk of contracting other water-borne diseases. One family I met, for example, proudly showed me a new water filter.

This community-led approach will be critical to the success of the “total sanitation campaign,” which Haitian Prime Minister Laurent Lamothe and I launched in Los Palmas during my visit. By encouraging household investment in durable, hygienic latrines, providing improved sanitation products and services at affordable prices, and ensuring that schools and health centers have adequate water and sanitation infrastructures, the initiative will improve health conditions for three million people in high-risk areas over the next five years. Just before leaving the village, we laid the symbolic first stone of a new secure water source.

The campaign is the latest step in a comprehensive United Nations-supported operation to eliminate cholera from Haiti. The UN and the Haitian government recently created a high-level committee tasked with implementing a comprehensive strategy that covers all aspects of cholera prevention and response, including scaled-up assistance for families and communities.

These efforts have already reduced the toll of the epidemic significantly. During the first few months of this year, the number of cholera cases and deaths declined by some 75 percent compared to the same period of 2013, reaching the lowest level since the outbreak began.

To be sure, Haiti still hosts the largest number of suspected cholera cases in the Western hemisphere - unacceptable in a world of such vast knowledge and wealth. But the country is on a trajectory toward success. Just as cholera has been eliminated from other difficult environments worldwide, it can be eliminated from Haiti.

Haiti’s prospects are improving in other areas as well, owing partly to the UN’s commitment to the country. Since 2004, the UN’s Stabilization Mission in Haiti (Minustah) has been working to improve the security environment, support the political process, strengthen government institutions and protect human rights. It also played a major role in stabilizing and rebuilding the country after the 2010 earthquake.

As a result of Minustah’s efforts - and those of other UN agencies - the security situation has improved considerably, underpinned by a stronger judiciary and a more effective national police force. Meanwhile, primary-school enrollment rates have soared, from 47 percent in 1993 to nearly 90 percent today.

The international community’s continued support will also remain essential. Most urgently, Haiti needs help funding its $2.2 billion ten-year National Cholera Elimination Plan. So far, just 40 percent of the $448 million that will be needed in the first two years for investments in early warning, rapid response, water, sanitation and vaccines has been mobilized, and only 10 percent of the total has been pledged.

The Haitian people possess all of the compassion and determination needed to overcome the cholera epidemic and achieve inclusive economic development. But the international community - in particular, international financial institutions working in the region - must step up and support them.

I was profoundly moved by the hospitality and compassion that I saw in Los Palmas. But I also understand that Haitians expect their government and the UN to deliver on the promises made that day. If everyone does their part, we can give Haitians the healthier, more prosperous future that they deserve.

*The author is the current secretary general of the United Nations.