Dormant areas of FEZs are cut

Dormant areas of FEZs are cut 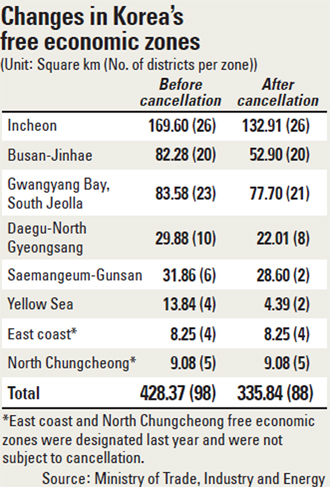 As part of deregulation efforts to boost the economy, the Korean government says it will cancel the designations of 14 districts within broader free economic zones nationwide, affecting about 22 percent of the nation’s land designated as off-limits to ordinary commercial development.

That area is about 30 times larger in total than Yeouido, a 2.9-square-kilometer (716-acre) island in Seoul.

The government said the new measure was decided because the free economic zones had failed to attract foreign investments in the three years since they were established. Instead of waiting for a one-shot investment, the government said it hoped the lands could be developed at a local level and boost the regional economies they are a part of.

The 14 districts freed up are in six of those zones. The east coast and North Chungcheong zones were designated just last year and were exempt from rescission this year.

Beginning today, owners of land in those 14 districts can trade their land and do any business activities there.

Under the nation’s free economic zone act, land owners were barred from developing land that was part of a zone even if it was left fallow and attracted no investments. That left the owners with financial damage by being unable to profit from their holdings. Even if they wanted to sell their land, owners had to obtain permission from the free economic zone authority and the Ministry of Trade, Industry and Energy. But by land owners’ requests, the government passed a law in 2011 that directed a second look at the designations three years after they were made a part of the program.

The Industry Ministry said in a statement that it “hopes to see the remaining parts of the free economic zones receive more focused investments. The ministry will introduce further deregulatory measures and policies to attract foreign investments.”

One of the largest beneficiaries of today’s measure is a group of land owners in Busan and Changwon, South Gyeongsang. About 9.9 square kilometers of land, including some mountain and residential areas, was frozen as green belt areas of the Busan-Jinhae Free Economic Zone. That area is more than a third of the that free economic zone.

“After 10 years of designation as part of a free economic zone, there was almost no investment beneficial to our regional economy,” said an official from the Busan-Jinhae Free Economic Zone Authority. “So we concluded it was impossible for us to just wait for external investments any longer. We don’t think there will be vast business investments locally, but we think it’s going to be better than just waiting.”

Lim Ki-sung, director of policy planning at the Industry Ministry, pointed out “excessive” and “thoughtless” designations of economic zones as the reason for today’s measure.

“In fact, some of districts that were freed today have nothing to do with their names,” said Lim. “For example, Gumi Digital Industrial District so far is empty with no sign even of investment contracts. It was just the local government’s hope to develop the land as an IT industrial complex and attract branches and production lines of local or foreign companies in IT.”