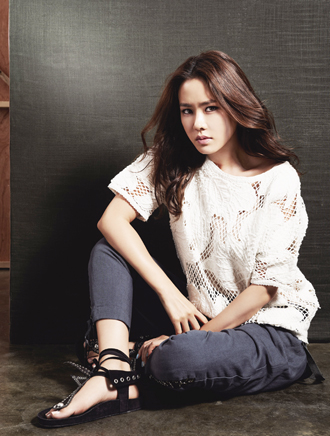 Actress Son Ye-jin has taken on a new challenge in “The Pirates,” which hits local theaters tomorrow, by appearing in an action movie for the first time.

Although action is its predominant genre, the period film also veers toward comedy, which gives it a lighter and more approachable edge.

The fictional story is based on the fact that the Joseon Dynasty (1392-1910) didn’t have a state seal for close to a decade after the country’s establishment. Scriptwriter Chun Sung-il, known for the KBS drama “The Slave Hunters,” pitted pirates and mountain bandits against each other on a hunt for the missing seal.

In the movie, the royal seal was awarded to ancient Korea by a Ming Dynasty emperor, but it went missing and was assumed to have been swallowed by a whale.

Son talked to the JoongAng Ilbo, an affiliate of the Korea JoongAng Daily, and shared her excitement about her first action film. Here are some excerpts.

Q. Why did you take on the challenge of an action film?

A. There are not that many action films with actresses, and I think I’ll lose my chance to be in one as I get older. I wanted to try one before it was too late. It was very attractive to play a female pirate. It wasn’t easy for me to act as the leader of the pirates with a powerful force because I have done many roles that were more ladylike. I didn’t smile with my eyes, which is my trademark, at all [in the movie].

Did you feel comfortable playing the heroine?

It is more comfortable for me to show a down-to-earth side than a feminine side. I’m more comical and mischievous, like the character I played in “The Art of Seduction” [2005] than modest and ladylike.

What was it like to work on the action scenes?

There were many times where I just threw myself in. There was a scene where I had to fall straight down while wearing a wire. I bit my lip and pretended that I wasn’t scared. Toward the end of filming, I started to learn some skills related to making the action more dramatic.

So did you feel less worried about showing various emotion?

Because the movie wasn’t about showing those details, I didn’t really feel worried. But the filming conditions themselves made the process much more difficult. We normally filmed on top of a vessel, but it was winter, so my face was frozen. There were so many people in the scenes, so I had to act when I was [distracted]. That made me miss some details.

Do you feel pressure to show something new all the time?

I just hate repeating the same thing over and over again, so I try to choose a movie that could have me acting out different characters in different settings. That’s why I did the disaster film “Tower” (2012), followed by the thriller “Blood and Ties” (2013) and then chose a more comical movie this time. I want to do some human drama [next].