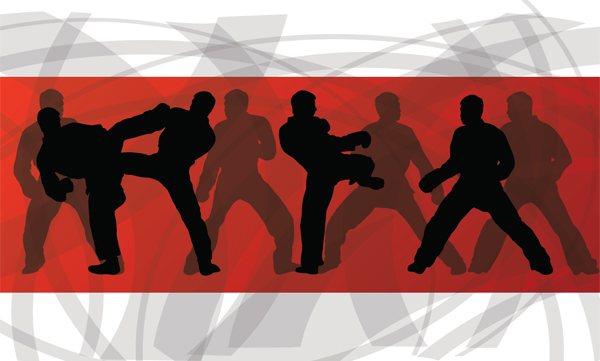 Action scenes in movies guarantee visual excitement and grab the audience’s attention in flashy and wildly diverse symphonies conducted by the martial arts director. It is their duty to construct the actor’s line of movement to set an appropriate tone for the film. The JoongAng Ilbo introduces five martial arts directors who have impressed on screen with their powerful action scenes in recent movies. 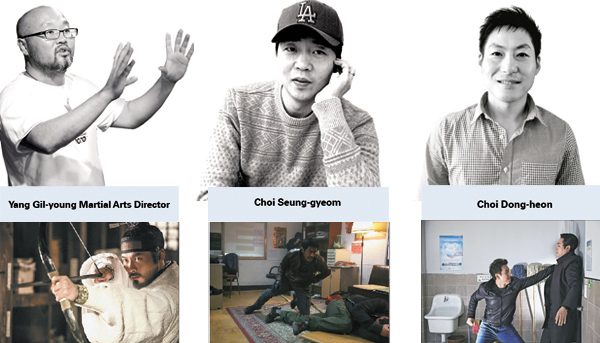 Historical movie “The Fatal Encounter” (directed by Lee Jae-gyu) portrays the emotions of King Jeongjo (Hyun Bin) of the Joseon Dynasty (1392-1910), who comes under threat in multiple action scenes.

“Instead of following the trend of showing flashy and exaggerated action scenes, I wanted to show a restrained action,” said martial arts director Yang Gil-young, 46.

“Those were the days of continuous hardship and difficulties,” said Yang. “I was scared about how the future would turn out.”

Yang made his directorial debut after being trained by martial arts director Jung Du-hong. He rose to prominence through his work in the legendary “Oldboy” (2003), which Choi Min-sik starred in. The so-called “hammer action” scene where Oh Dae-soo (Choi) faces several opponents in a long, narrow hallway is one of the most famous action scenes in Korea.

The action scenes in “A Hard Day,” in which police detective Geon-soo (Lee Sun-kyun) becomes embroiled in a deep conspiracy, are far from showy. Martial arts director Choi Dong-heon described them as “a desperate battle where two men’s bare bodies collide,” where the actors’ pain is directly conveyed to the audience.

Choi is famous for his action scenes involving vehicles, but he has also proved his capability in battle scenes. The director initially began in the movie industry by working as an action star and made his debut as a martial arts director in the mystery thriller “Into the White Night” (2009). He produced the film’s murder scene and a car accident.

Later, Choi worked on various films such as “Over My Dead Body” (2012), “Dancing Queen” (2012) and “The Spy: Undercover Operation” (2013). But of the various movies he has been involved in, it is “Quick” (2011) that best conveys Choi’s style. The smooth action scene depicting a car speeding through the middle of Seoul is visually exciting.

After “Quick” was released, makers of movies, ads and even music videos wanted Choi’s help. The director took over the action-filled car scene through the narrow streets and stairways in “The Suspect” (2013), and also participated in the recent filming of “The Avengers: Age of Ultron” in Seoul, which will be released next year.

Choi is also the martial arts director of “International Market” by director Yoon Jae-kyoon, which will debut later this year. “I’m attached to the movie, as it shows the pain that my father’s generation dealt with through painful action [scenes],” Choi said.

There is tension and sincerity in ex-soldier Yeon Hoon’s action scenes as he struggles to overcome a false murder charge in “The Target.” Martial arts director Choi Seung-gyeom, 34, applied the Russian martial arts Systema to the film’s many quick-paced action scenes.

Choi was a taekwondo athlete at school. “When I watched movies as a kid my eyes were drawn to the stunt doubles rather than the actors themselves,” Choi said.

The director received his first taste of action by joining the stunt team of the KBS2 TV series “Taejo Wang Geon” (2000-2).

“While taekwondo has quick, fast movements, action scenes have to look flashy,” Choi explained, “so I had to learn the actions all over again, starting from how to kick.”

However, Choi returned to the set after a year of rehab and later made his debut as a martial arts director on “The Suspect” by director Won Shin-yeon. “I applied Systema to show something new. It was probably the first time it was done in Korea,” Choi said. “A lot of people confuse the action in “A Company Man” with So Ji-sub (2012) as Systema, but that’s not true.”

Choi added that he wants to try new action scenes that use poles or swords in historical dramas. 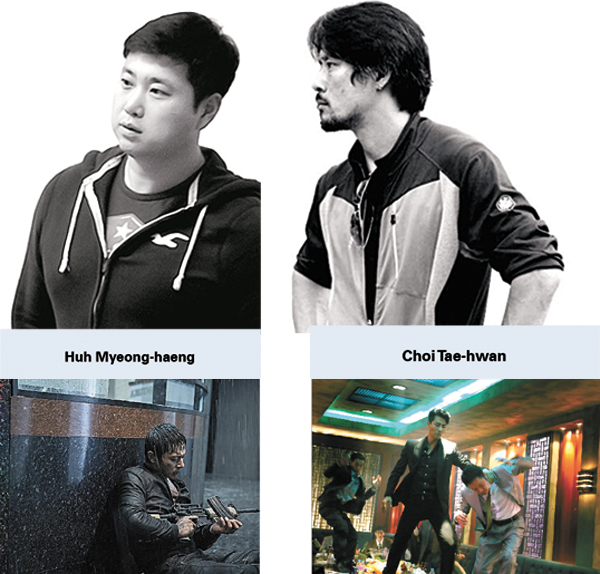 “No Tears for the Dead,” directed by Lee Jeong-beom, is about Gon’s guilty struggle as he fights against his own gang members.

Martial arts director Huh Myeong-haeng, 35, took into consideration the fact that Gon is a killer from the United States to create unique action scenes where he freely uses guns and combines football with jiu jitsu, the Brazilian martial arts style. ]

“While Jung was busy preparing for both “A Bittersweet Life” (2005) and “The City of Violence” (2006),” Huh said, “Jung asked if I wanted to be a martial arts director and I immediately responded ‘yes.’?”

With that, Huh made his debut as a martial arts director at 26.

Later he paired up with Jung to make “The Good, The Bad, The Weird” (2008) and “Jeon Woochi” (2009) where Kang Dong-won stars as a Taoist wizard. After “Hindsight” (2011), he went solo. The scene where gang boss Hyung-bae (Ha Jung-woo) smashes a bottle on the opponent’s head in “A War Against Crime” (2011) and a bloody fight scene in the elevator in the crime movie “New World” (2012) are two of his most famous action scenes.

Choi was a child actor who starred in four movies when he was younger. He entered the action world quickly, working on “War of the Arrows” (2011) and war comedy “Battlefield Heroes” (2011).

He is still active as an action star as well as a director; Choi plays the man who fights against Ji Dong-chul (Gong Yoo) in a crime scene during the beginning of “The Suspect” (2013).

Currently, Choi is in India working on the action-filled “Pan” in which beloved Indian national movie star Shahrukh Khan stars as the protagonist. “I’m working hard with the pride that I’m the first Korean staff member to participate in an Indian film,” said Choi.

The martial arts director was inspired by Chinese action star Jackie Chan as a kid and still considers him an idol. “I like all of Jackie Chan’s action,” he said.