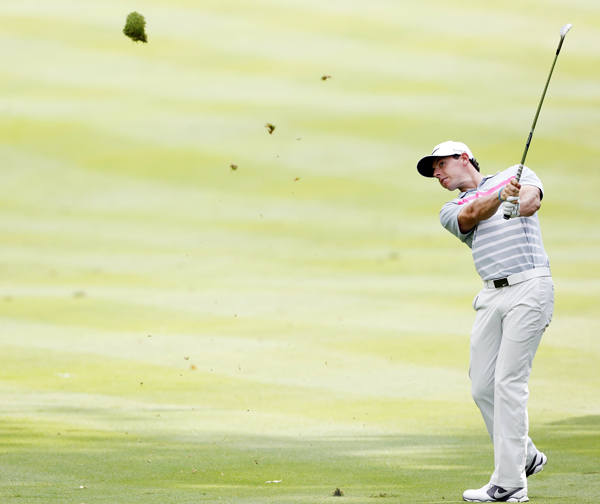 Rory McIlroy hits his approach shot on the fourth hole during the final round of the WGC-Bridgestone Invitational golf tournament at Firestone Country Club on Sunday. [USA TODAY/NEWS1]

Rory McIlroy rallied from a three-shot deficit to win the Bridgestone Invitational on Sunday and return to No. 1 in the world.

In his first start since a wire-to-wire win in the British Open, McIlroy picked up his first World Golf Championship title at Firestone. And just like at the Royal Liverpool, the 25-year-old from Northern Ireland made it look easy.

Sergio Garcia had a three-shot lead going into the final round at Firestone. McIlroy fired off three straight birdies and already had the lead when he stood on the fourth tee. He took over the lead for good with an 8-foot birdie putt on the 11th hole, got some breathing room when Garcia made bogey on the 15th hole, and McIlroy cruised home to a two-shot victory.

Garcia closed with a 71, though his runner-up finish was enough to move him to No. 3 in the world.

McIlroy became the 13th player with a major and a World Golf Championship, and joined Tiger Woods as the only players to win them in consecutive starts.

Woods wasn’t around to see it.

Just four months after back surgery, and in his third tournament since his return, Woods injured his lower back when he landed with a thud in the stand from an awkward stance atop a bunker on the second hole. He withdrew after a tee shot on the ninth hole, bending over slowly and struggling to remove the tee from the ground.

It was not clear if Woods will be able to play in the PGA Championship next week.

McIlroy heads south to Valhalla with a full head of steam. After a brief celebration with the claret jug, he was determined to move forward and chase more titles over the final four months of the year. He backed it up with a powerful performance on a soggy Firestone course to take the top spot in the world from Adam Scott.

More important was the world ranking.

He lost the No. 1 position in March 2013 when his game was in a downward spiral as he was adjusting to a new equipment deal and going through another management change. But since winning the BMW PGA Championship at Wentworth at May, his game looks as strong as ever.

“It feels like a long time since I lost that No. 1 spot, but it feels good to be back on top,’’ McIlroy said. “Hopefully, I can keep it for a while.’’

Garcia was a runner-up to McIlroy for the second straight time.

The Spaniard had the daunting task of making up a seven-shot deficit at the British Open, and Garcia put up a great fight until finishing two shots behind at Hoylake. Staked to a three-shot lead at Firestone, it didn’t go much better.

Garcia missed a 6-foot birdie on the par-5 second hole with a putt that never looked as if it was going in. His lead down to one, Garcia pulled his tee shot into the gallery on the third hole, striking a woman on the hand and knocking the diamond out of her ring. The diamond was found, about the lone bright spot in his day. Garcia made bogey, and McIlroy rolled in another birdie putt to take the lead.

They were tied at the turn when Garcia made a 15-foot putt for his only birdie of the day, and McIlroy missed from six feet. But two holes later, with both players about eight feet away for birdie, McIlroy made and Garcia missed, and the Spaniard never caught up.

Patrick Reed holed out for eagle on No. 17 in his round of 65 and gave him a tie for fourth, enough to move him up to No. 7 in the Ryder Cup standings and boost his hopes of making his first team with only the PGA Championship left in the qualifying period.

Phil Mickelson made 10 birdies for a career-best 62 at Firestone.

None of that could top McIlroy, who put on another exhibition with his driver that made Firestone look like child’s play.

“It’s the foundation of my game when I drive it like that,’’ McIlroy said. “I have a pretty good chance to win most weeks, and I’ve shown that the last couple of weeks. ... Going into Valhalla in good form and I’ll try to get three in a row.’’